The plan for today was to launch at Windmill Point and sail northwestish to Bluff Point before making a counterclockwise circuit of Fleet’s Bay. I’d go past the mouths of: Barnes, Henrys, Indian, Dymer, Tabbs, and Antipoison Creeks. Along the way I’d sail overtop of where Grog Island used to be. When I was a kid I sailed to it in my Sunfish, but it has since eroded away. Then I’d come around Windmill Point again and back into the marina for a 20 mile trip. 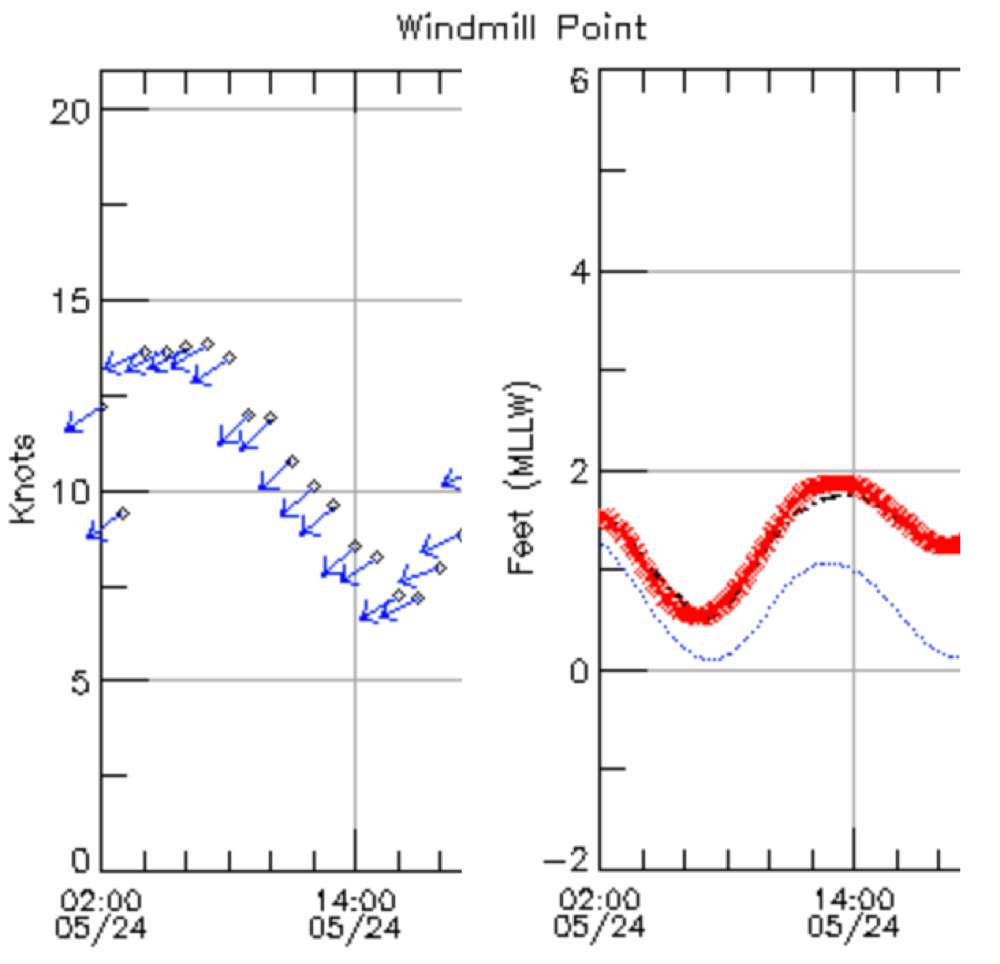 The weather was forecast to be north easterly winds of 10-15 knots when I started and gradually taper off to 5-10. The tide would rise the entire day and it ended up being about a foot higher than predicted. 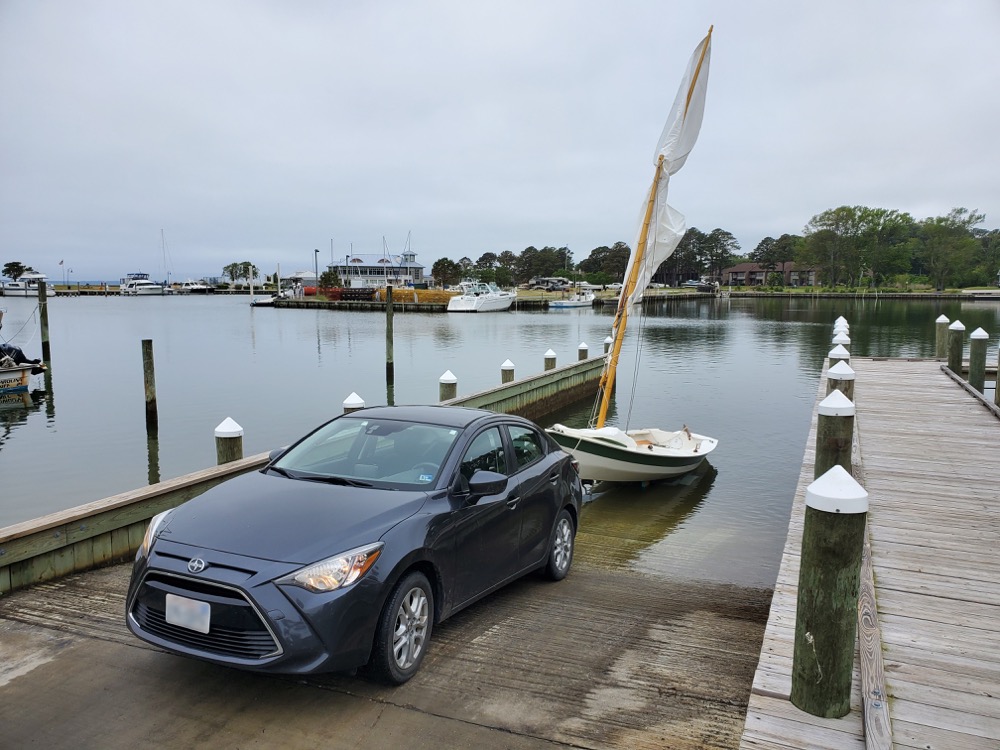 Launching at the public boat ramp on Windmill Point. The best way I’ve found is to set everything up in the parking lot and brail up the main sail. Then once I row away from the dock a bit I can unfurl the main, raise the jib, and be mostly ready to go. 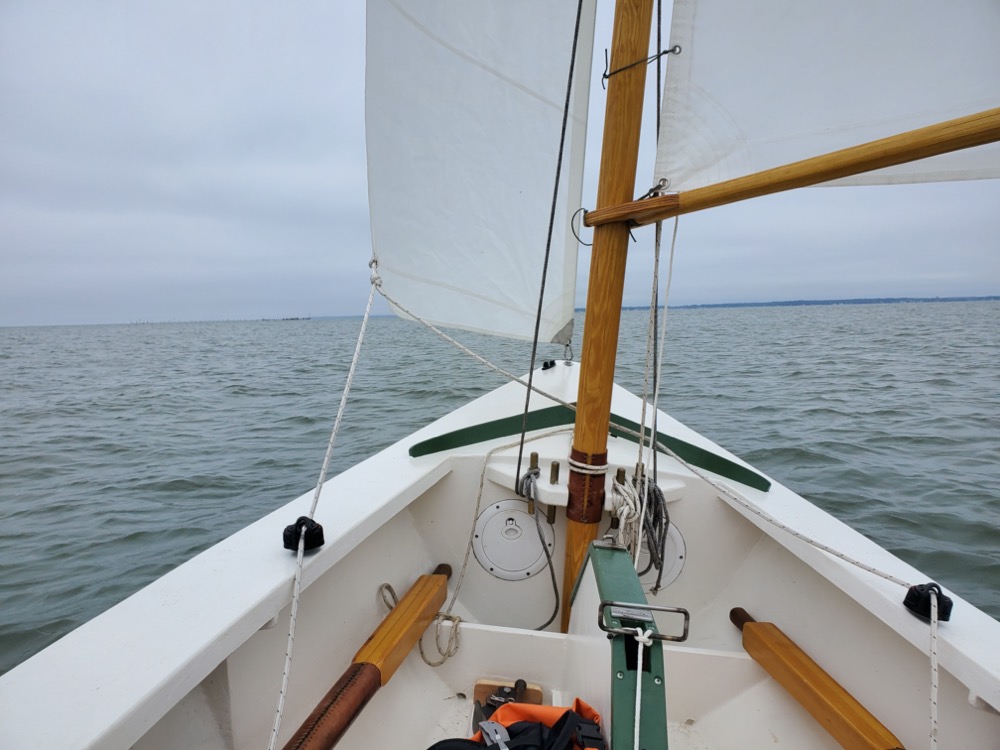 Heading downwind out into the Rappahannock River wing and wing. It was pretty windy and I didn’t have time to get all the lines situated up at the mast. The downhaul isn’t set and the brail line is flapping in the breeze. 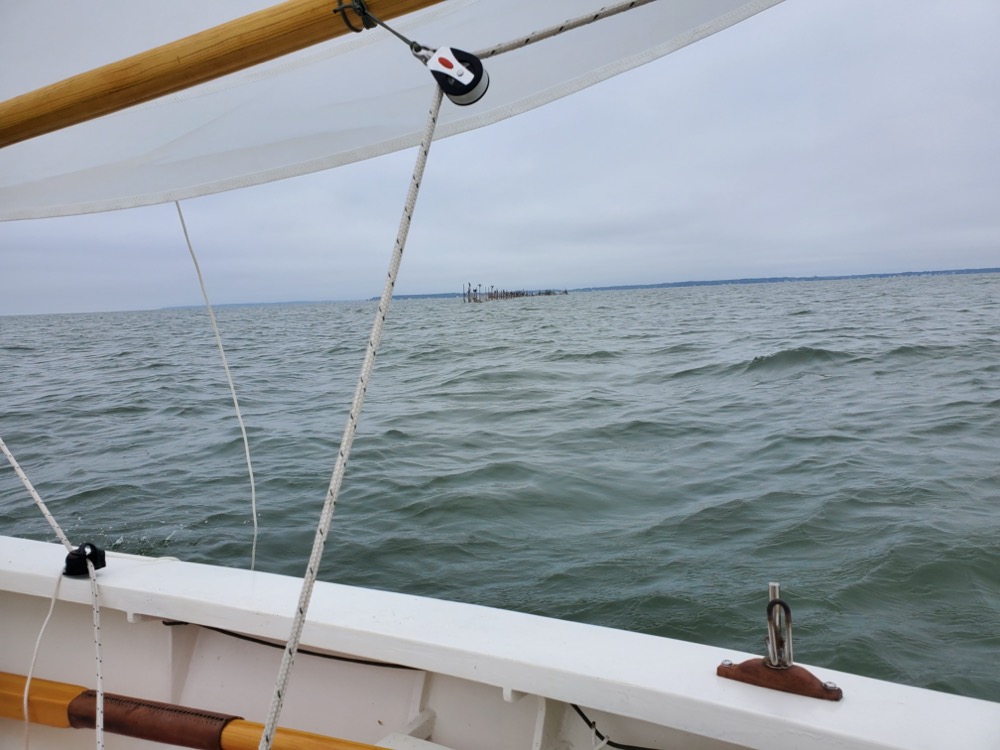 I made a left and started heading for the point. Off to my right is a pound net. A 600′ fence directs fish into a heart shaped trap which then funnels them into a pound and a subsequent smaller pound. Then pelicans, cormorants, and herons get in there and eat all your fish. You can see the brail line flapping away.

After rounding the point the waves started getting bigger and the wind was pretty gusty. It was around in here where I decided that while I could probably do my original trip, it wouldn’t be very comfortable. There was 20 miles of fetch building up across the bay, so I decided to turn across the river and see what happens. 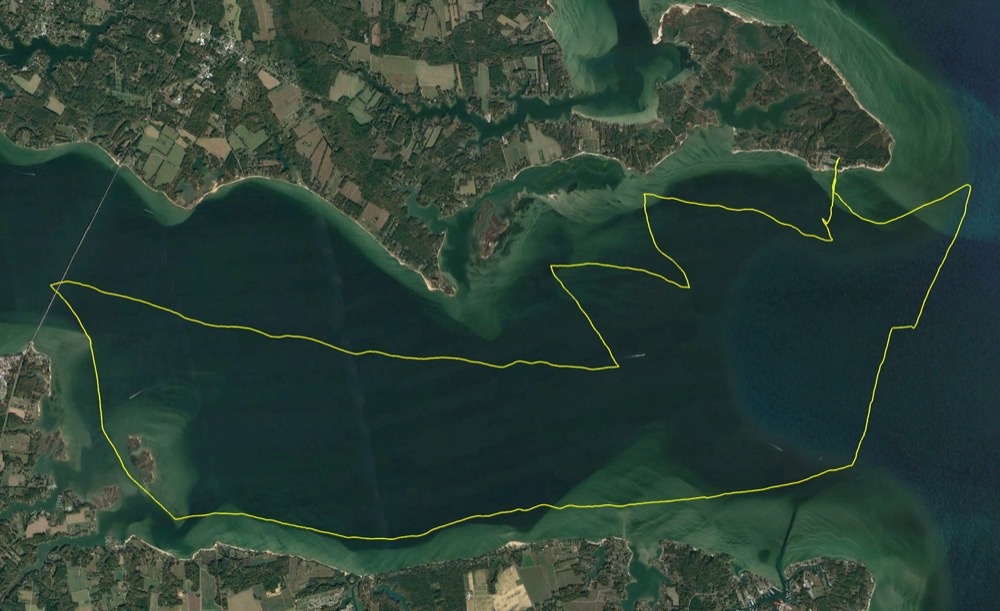 I ended up cutting south to Stingray Point, down the southern shore of the Rappahannock to the bridge, and then back upwind to Windmill Point. I did 26.2 miles in 5.5 hours with an average speed of 4.8 mph and a max of 7.8 mph.

Halfway across the Rappahannock I decided to practice heaving to so I could fix the lines up by the mast. I backed the jib and set the rudder to turn me into the wind. It was stable enough for me to go forward and tie the downhaul and secure the tail of the brail line. I drifted at 2-2.5 mph.

Getting closer to Stingray Point. In 1608 Captain John Smith explored this area and he was stung by a stingray. Apparently he was close to death, but the local Indians provided a cure from the nearby Antipoison Creek. Sailing downwind with a quartering sea was a bit exciting with a lot of rolling. I can see why tacking downwind is more comfortable. I averaged 5.5-6 mph through here.

Steering hands free across the mouth of Sturgeon Creek. The waves were hitting me more side on and big ones really tried to slide the stern around. 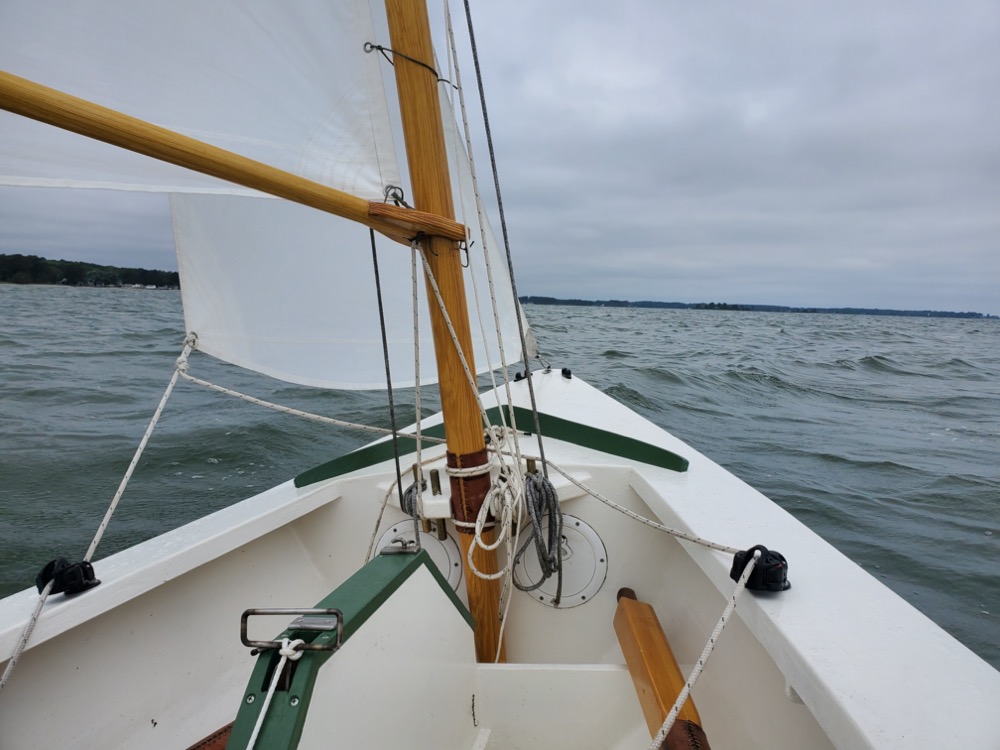 Heading along the shore towards the bridge on a reach. I hit my max speed of 7.8 mph along in here. 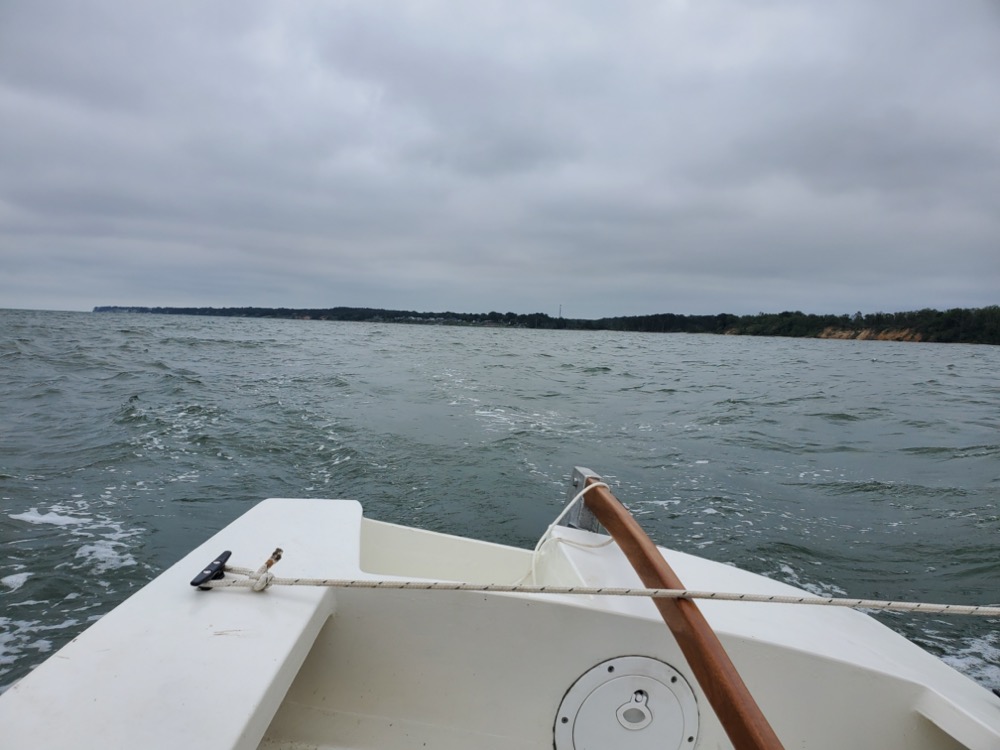 Looking back towards Stingray Point and the waves had gotten a bit smaller because Windmill Point was blocking the fetch. 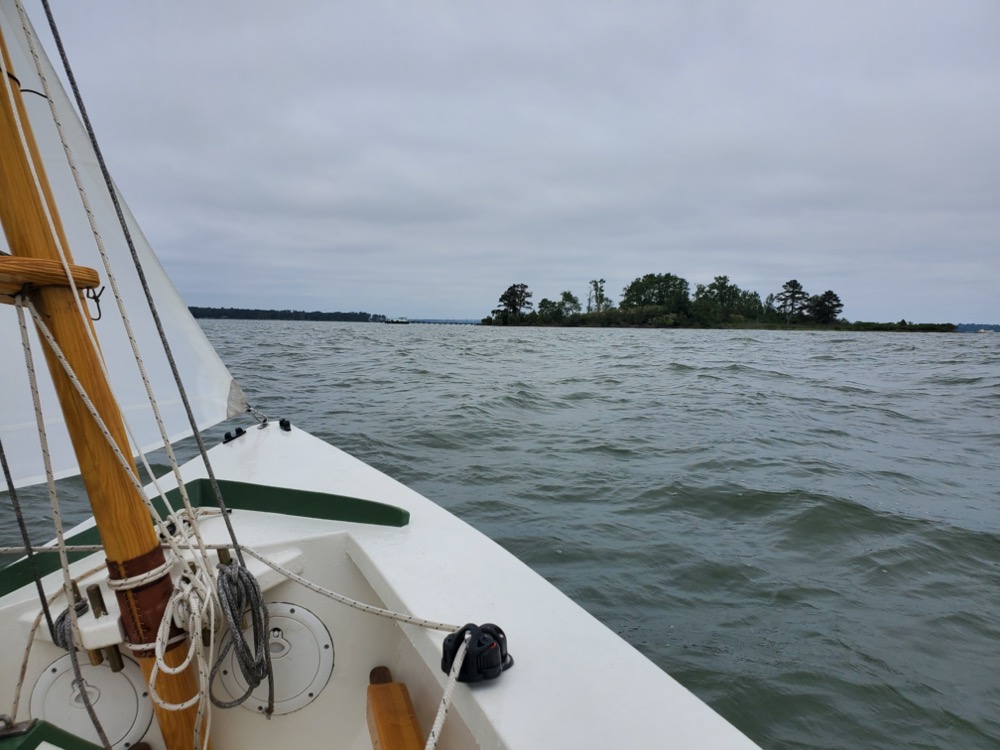 Coming up on Parrott Island from the opposite direction a week ago. 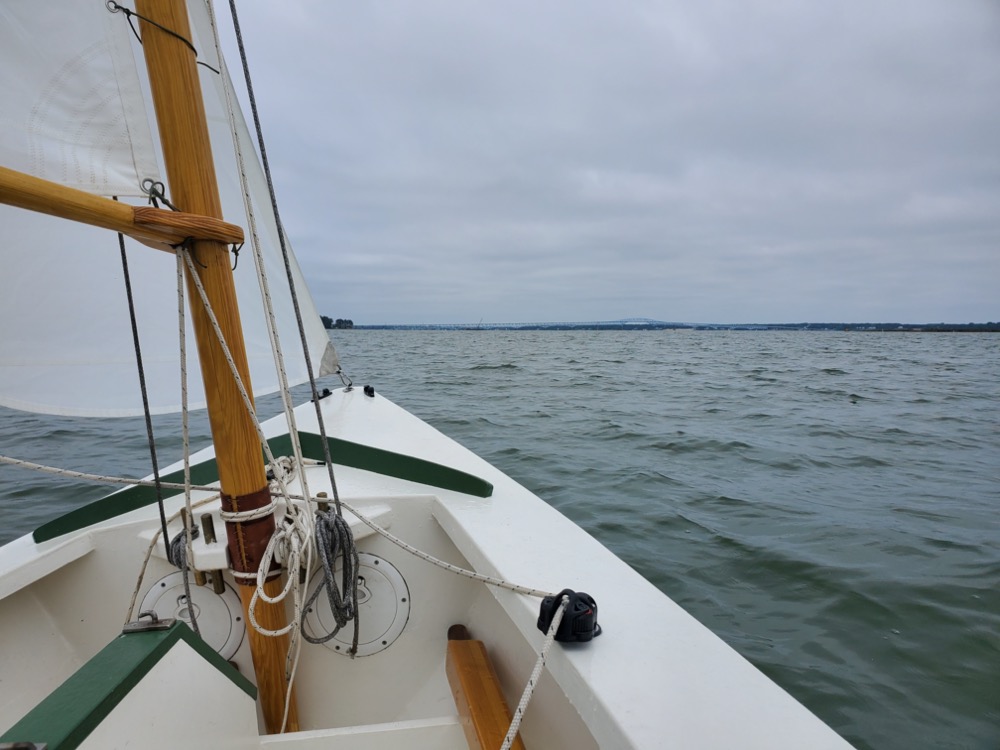 After rounding Parrott Island I debated heading back to the ramp, but you can’t come this close without making it to the bridge!

This marker marks the tip of a large shallow section. I’ve been noticing daylight through it when I drive past on the bridge, but I didn’t realize it was this bad. I remember sailing my Sunfish around here 15 years ago and it was pretty solid. 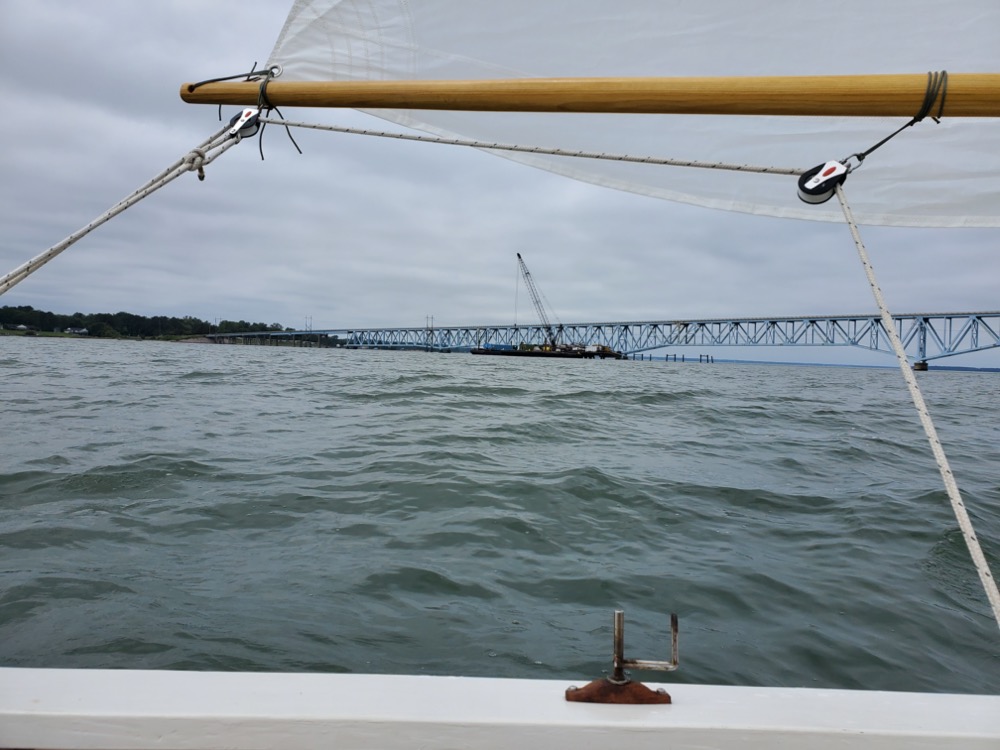 Here’s some juicy local news for you. The wooden towers holding the 110kV powerline across the river were installed in the 50’s and they’re getting in rough shape. The Department of Transportation wants the middle section that hangs from the bridge removed since it has to be de-energized before they can do maintenance. Plus it cuts into the weight capacity. Dominion Power came up with a $26.2 million proposal for ten new towers across the river, but the comehere’s all raised sam hill and demanded it go underground because it’ll spoil the view. The SCC agreed so it’s going underground for the mere cost of $92.3 million. Just 2.5 times more, what a bargain! They should have passed a hat around if they wanted it underground. 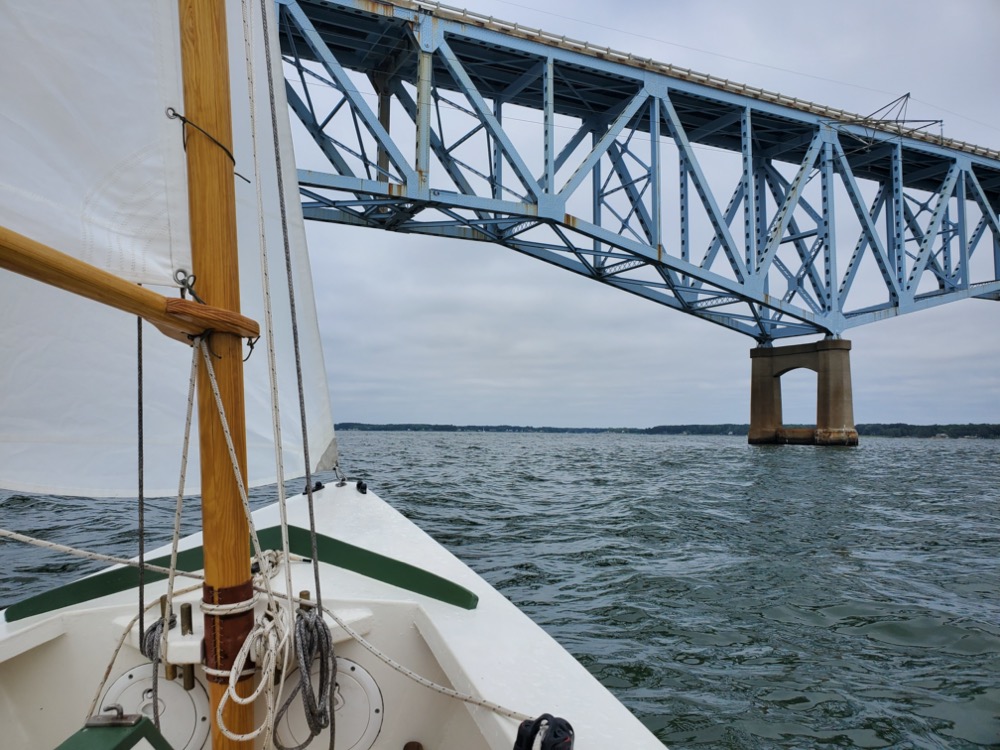 Our bridge was painted two years ago but it’s already rusting. The concrete pilings are spalling and rusty rebar is poking out. I say we should have built the towers so when the bridge falls over we’ll have something to hang onto while we await rescue.

Anyway, enough ranting haha. I rounded the bridge and started tacking back to the point. Fortunately one leg was 5.5 miles long. There were tons of sailboats out, probably 20-30 that I saw. 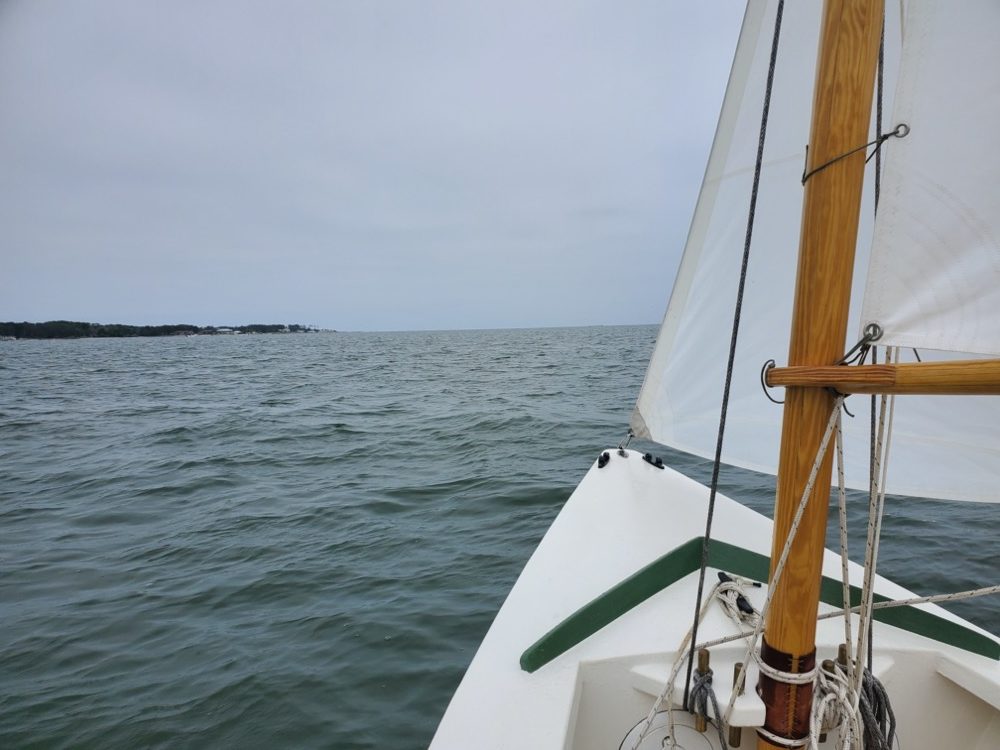 Coming up on the point. At this point my tacking was getting terrible and I felt like I was never going to make it. I was going against wind and tide and my tacking angles averaged 112º. 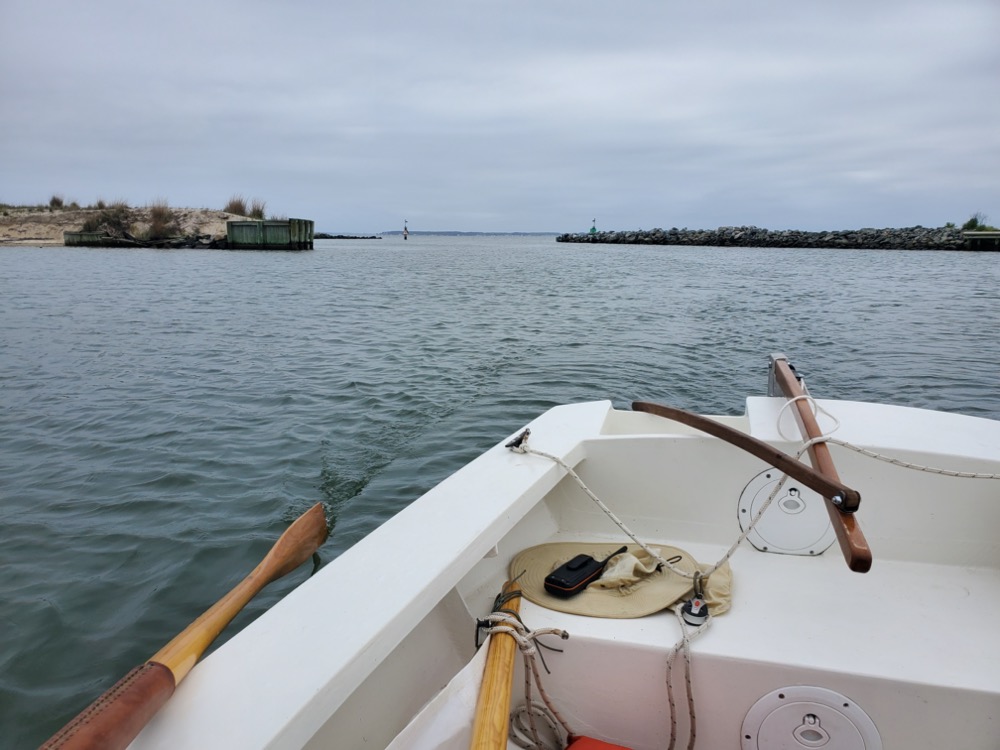 So I dropped the sails and rowed 2/3 of a mile back into the marina. I averaged about 3mph, although that probably was a bit fast for all day rowing. It took around 250 strokes, so that works out to approximately 14′ per stroke. I really haven’t done much rowing with this boat, so it’s interesting to see what sort of performance I’ll get.