First sail of the year after a ton of improvements and repairs over the winter. I’m happy to report everything worked well, although there is still room for improvement. Today my wife and I took the boat out from the public ramp at Mill Creek. I’d originally intended to head out upwind into the Rappahannock but there was some chop that threw spray over the bow. My wife was getting wet and cold, so I decided to head for Mill Creek itself so it would be sheltered.

The ramp is pretty good with lots of room to get turned around, but there’s one issue that doesn’t show up on Google Maps. That pile of sand being held back by the jetty has a tendency to silt up the entrance to the ramp. Sometimes it’s hard to remember that the world isn’t as unchanging as satellite pictures portray.

This was high tide and there was only a ~10′ wide opening between the dock and wooden wall to the sand. Pretty doubtful anything much bigger than my boat could get through. There were signs saying there’s only a foot of water at low tide too.

The toggling robands make rigging the boat faster than last year, but there’s still a lot of fiddly stuff that I’d like to improve. This was also the windiest place I’ve ever set the boat up at, although it all worked ok.

Inserting the toggling snotter turning block between the right robands. This is a vast improvement over the cow hitched version I’ve been using, but I think a mast traveler and a dedicated halyard is the way to go. Also the peak pennant is a good upgrade. The only downside is it’s pretty long.

Cleating off the peak pennant. I then coil up the excess and tuck it between the sprit and pennant. That seemed to hold it pretty well, although today wasn’t particularly rough sailing either. Tensioning the snotter will push the peak up and take out that diagonal crease, but it’s better to have the snotter loose before brailing.

Next I brailed up the sail. This is the probably the biggest issue after the improvements outlined above. I found it hard to get the sprit and peak pennant between the brail line and sail without losing the tail of the brail up to the throat. A longer line would help so I could get enough slack to thread everything through. 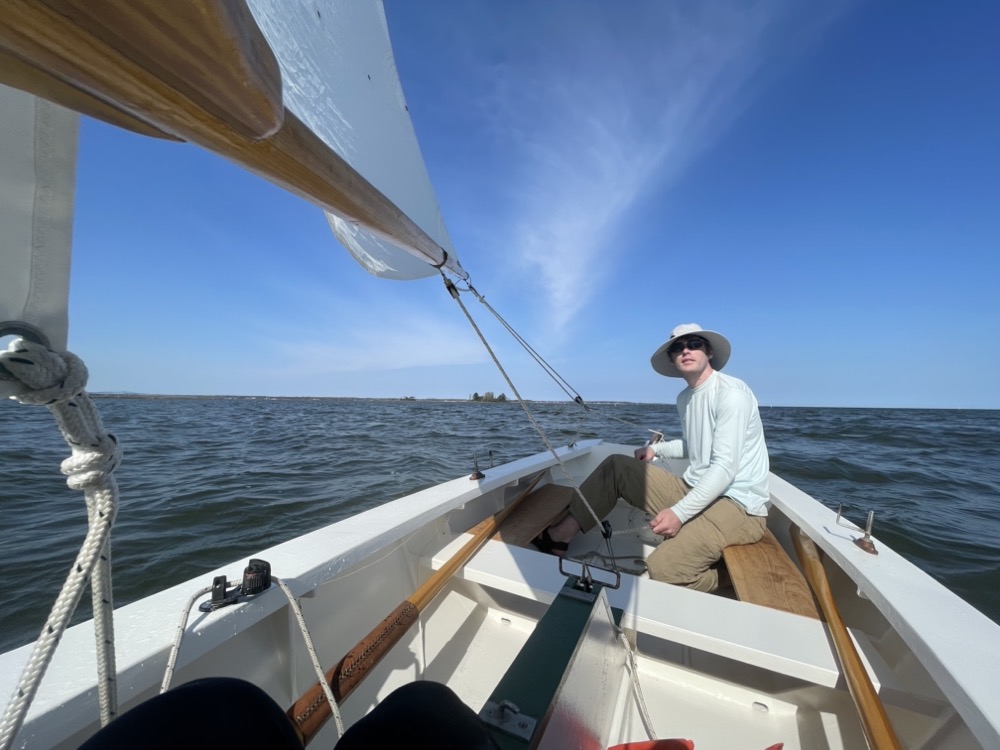 And we’re off! Heading into the Rappahannock was a bit choppy and my wife was getting hit by spray, so I made a 180º to explore Mill Creek. The side benches are a new addition. They aren’t as comfortable as sitting on the sole, but it is quite a bit drier.

Looking back at the entrance. This would be a good opportunity to test out sailing in flukey winds.

Sailing wing and wing. Here you can see the spiral toggling robands and how the excess peak pennant is coiled up and secured. I haven’t run the boom downhaul aft yet, but once I do I’ll have an unused belaying pin for a snotter traveler halyard.

Looking up to the head. I’ve always seemed to have trouble with the brail line pulling in the leech. The weight of the line coming down the mast is more than from the throat to the grommet, and the sprit pressing on it doesn’t help. I think a snotter traveler might make the brail line obsolete which would be nice.

There are a lot of boat houses on this creek which give it a certain kind of charm.

This is my wife’s kind of sailing. I don’t think she’ll be taking up sail and oar cruising.

Heading back towards the entrance. It took 36 tacks to get back to the ramp.

Heading back. I’m making a new tiller extension swivel from 316 stainless which is why the extension isn’t installed.

Towards the end the rudder started plowing through the mud which wasn’t too bad, but it hit something solid enough to pop the quick release clam cleat. This is the first time that’s happened and I was beginning to wonder if the rudder would have enough leverage to pop it loose. We had to tack for quite a ways with the centerboard held down by hand as it was so shallow.

When I looked at the GPS track I noticed the tacks towards the mouth of the creek had this scalloped look to them. I think what happened is I’d try to point too high after tacking and then I’d fall off some to get the speed up. Then I’d start pointing up again and lose speed.

Anyway, that was my first outing this year! I went 3.5 miles in about an hour. Average speed was 3.5mph and the max was 7.5mph. A pretty short trip, but I got some good data on sailing in narrow protected creeks and now I know my improvements are all working well.