My wife and I are down at Atlantic Beach in North Carolina on vacation and on Saturday I went on a daysail to the Cape Lookout Lighthouse on the South Core Banks. To get there I circled Shackleford Banks which meant I had Moga out in the Atlantic for a few miles. There were tons of boaters though, more than I’ve ever seen. I went 32.7 miles in 8.5 hours with an average speed of 4 mph.

I’ve been messing around with making a topsail for my boat lately, and it’s finally been nice enough to go for a sail and give it a try. I went 18.3 miles to nowhere in particular, although I did get a picture of myself from a traffic camera.

It’s been too hot to sail lately, but I did take a friend Steve’s Snark out at a July 4th get together. This boat is 11′ long and made entirely of styrofoam. It is surprisingly fun and quick to set up and it’s got me thinking of a car toppable skin on frame sailboat someday.

My buddy and I both sailed it and our combined 380 pounds was just a bit over the max capacity of 310. We had water pouring over the bow at every wavelet and the boat twisted a fair amount. I later took it out about a mile and a half into the Rappahannock with no problems.

Apparently you could mail order the boat for $88 and the carton flap of Kool cigarettes. Free shipping!

Recently I went on a 34.3 mile daysail around the Mobjack Bay starting from the boat ramp on the Ware River. My average speed was 3.8 with a max of 6.9 mph. It was a pretty good day, although there were a few hours of rowing and drifting when the wind gave out.

Last Saturday I went on my first overnight beach cruising trip from Windmill Point to Tangier Island and back. It was 68.5 miles and my average speed was 3.4 mph. The winds were light and contrary, but sailing went fine. My camping setup is woeful, so that will need some improvement. I learned a ton on this trip too with a near miss on a lee shore at night.

Last Saturday I went for a daysail that ended up being 40.7 miles from Windmill Point to Reedville and back. It took 9.25 hours at an average speed of 4.4 mph and a top speed of 8.1 mph. It was pretty windy at times, but my winter improvements all worked well. 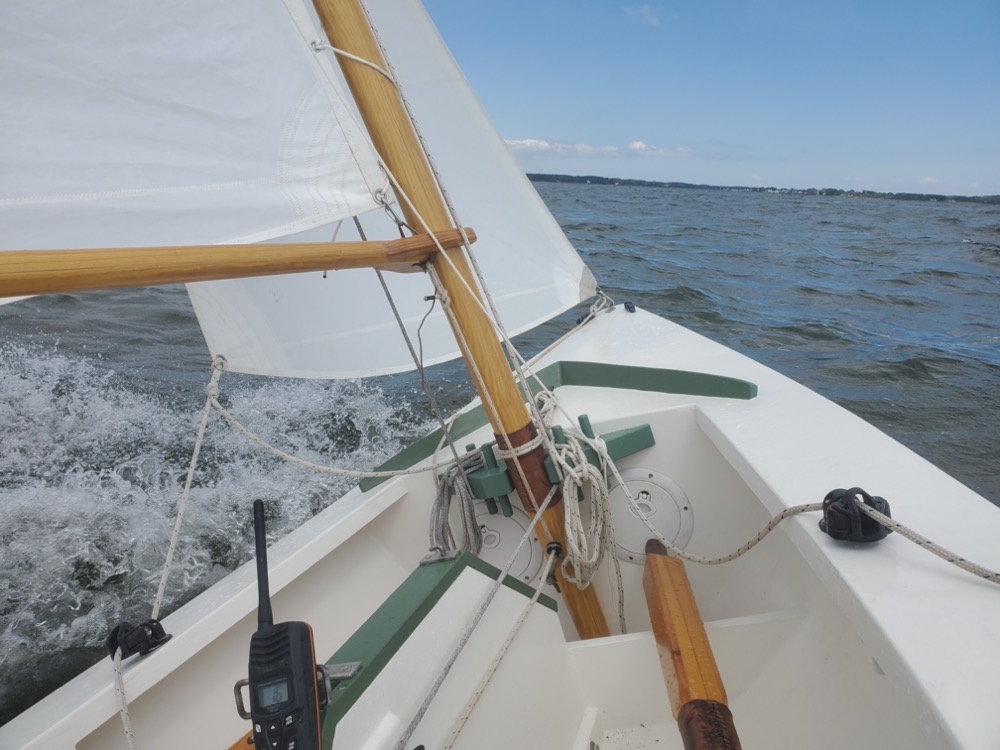 The last improvement to the boat was the addition of a turning block for the boom downhaul. Previously I’ve just been using the tail of the main halyard to pull the boom down, but I’ve been a bit wary of doing it that way since it could increase the time to get the sail down in a hurry. So today I drilled a hole through the base of the mast, chamfered the edges well, and attached a low friction ring in a loop of line. We’ll see if I need to add any purchase or not.

With the sailing stuff pretty much finished, I’ve been thinking of some sort of tent. I’d like to use the sprit as a ridge pole with a crutch on the transom. I think having the tent low at the bow might be a good idea to try and get the boat to weathercock into the wind too. I’ll probably make a prototype out of polytarp and carpet tape and just clamp the crutch onto the motor well for the first few outings until I can get a better idea of how it needs to work.

Possibly the tent could be used in this position too in calm conditions.

Earlier this week we had some nice weather so my wife and I took Moga out on the first sail of the year. It was just a short 3.5 mile cruise down the narrow Mill Creek, but it was enough to see that all of the improvements and repairs I did over the winter are working well.

Today was calm so I decided to try out my improvements with a test rigging. I’m pleased to say everything is working great! I’ve made toggle robands for the mainsail, a long pennant for the peak which runs down the sprit to a cleat by the heel, the snotter tension leads aft, there’s a toggling snotter arrangement, and a few other various time saving measures.

All rigged! I hope I can get out on the water soon.

My original snotter was a little too complex for its own good. It was all one piece and cow hitched around the mast, which was good for minimizing the number of lines needed but it was super awkward to rig and unrig. So I decided I’d make something with a toggle to make it easier, and a separate snotter line that stays attached to the sprit. I’ll cut the tail off once I’m sure this version is working, and I might add another seizing below the loop and a third above.

Here you can see the snotter running from the heel of the sprit up to the low friction ring on the toggle arrangement and back down the mast to the mast parter where it turns aft to a cleat on the centerboard case. I’ve also addd a long line to the main’s peak which runs down the sprit to a cleat near the heel. I originally had the cleat on the other side of the leather, but it was too high to be convenient.

Here’s the snotter running through a beehole in the mast partner back to a cleat on the centerboard case. I got rid of the mechanical advantage I had last year, but this still seems to work ok. It’s pretty close to the limit friction wise though so I’ll have to try it out on the water to make sure. The other cleat is for a boom downhaul which I haven’t fully decided how to run yet.

I’ve been working along on all the stuff that needs to be fixed or improved, so this post will be a hodgepodge of random stuff.

Ross recommended making a bracket that bolts onto the centerboard and projects up through the centerboard trunk cap. Then a stainless rod attaches to that to allow you to raise and lower the centerboard. The bracket seemed like a lot of work, so I just drilled a hole and whittled out a section for the thickness of the rod. The hole is encased with thickened epoxy to provide a hard surface and the rod is bent in such a way that it lays flat along the cap when the board is in the up position.

Here’s how the rod sits when the board is up.

As I mentioned in my last post, the wiring on my trailer had quit working so I decided to permanently fix it. I bought 25′ of 7 strand 14ga trailer wire so I could run individual ground wires to the lights. I’m not going to use the trailer as a ground again, too much corrosion. The purple wire is the second brown wire to the brake lights, and the blue wire is the second ground. The red wire isn’t needed at all. I wired everything up with solder heat shrink fittings, which seem to work really well. These things have a little blob of low temperature solder in the middle that melts with a heat gun. After testing to make sure it was wired correctly, I wrapped everything in a few layers of electrical tape. Probably not as good as amalgamating tape, but I didn’t have any.

I originally built wooden rudder cheeks, but somehow they ended up too tight for the rudder. I was about to go on vacation and needed something, so I welded one up out of aluminum. I didn’t have time to paint it, so I’ve been sailing around with it bare for two years. I finally decided to have my buddy powder coat it the same green as the mast partner, but it outgassed quite a bit during the baking. Part of the problem was galvanic corrosion between the stainless gudgeon and pintles, so I cut some insulators out of a milk jug. Might not be necessary with the powder coating, but it can’t hurt.

The notch in my new mast partner ended up just a hair smaller than the original, so I needed to thin down my leather padding. I sharpened a little thumb plane razor sharp and it worked surprisingly well. Leather seems to have a grain to it since it would dig in one direction, but cut beautifully in the opposite. I took the leather down to about half its original thickness.

Added a small cleat to the sprit which will hold a line running through a bee hole from the peak of the sail. I figure this will make rigging easier, rather than trying to catch the peak in a notch on the end of the sprit.

Through a convoluted story, I ended up with this little outboard. It’s a Honda BF2A that looks to be in pretty good shape. It seems to make decent compression and everything turns freely. The only catch is that it’s missing about $300 in parts. It needs a carburetor, gas tank, air guide, and throttle linkage. I’m currently trying to decide if it’s worth fixing up, especially since I don’t know that it’ll run. I would really like to replace my British Seagull with this since it’s a 4 stroke, even though I don’t really run the Seagull enough to worry about the crazy oil ratio.