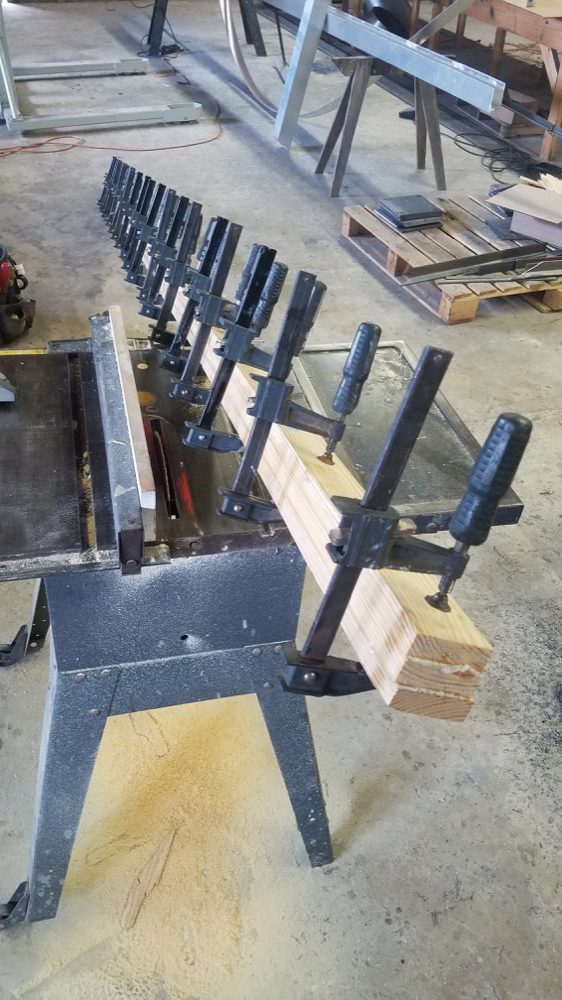 Next I started on the spars. I’ll need to make a mast, sprit, and boom. The mast will be hollow while the sprit and boom will be solid since their diameters are small. Here’s three pieces of 3/4″ yellow pine laminated together for the sprit. I did this on a bench and shimmed it as necessary to get it flat. 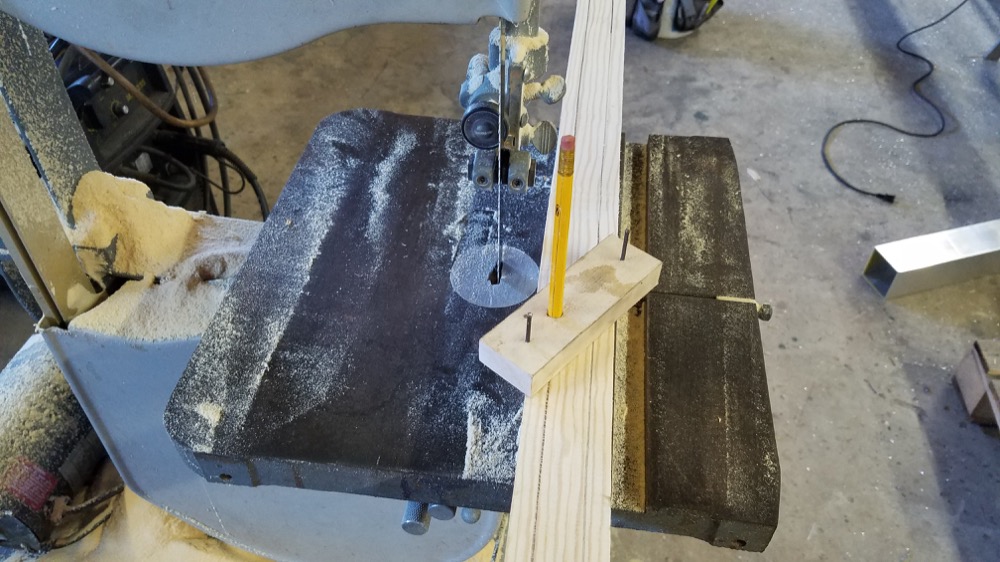 After striking a centerline and bandsawing the sides to the correct taper, I made a quick and dirty eight siding gauge to make it round. I used the bandsaw to cut off the majority of the waste.

An angle grinder with a 36 grit flap disc quickly removes wood as I took it down to close to 8 sided.

Then I followed up with a plane to make the 8 sides flat, then round them over. 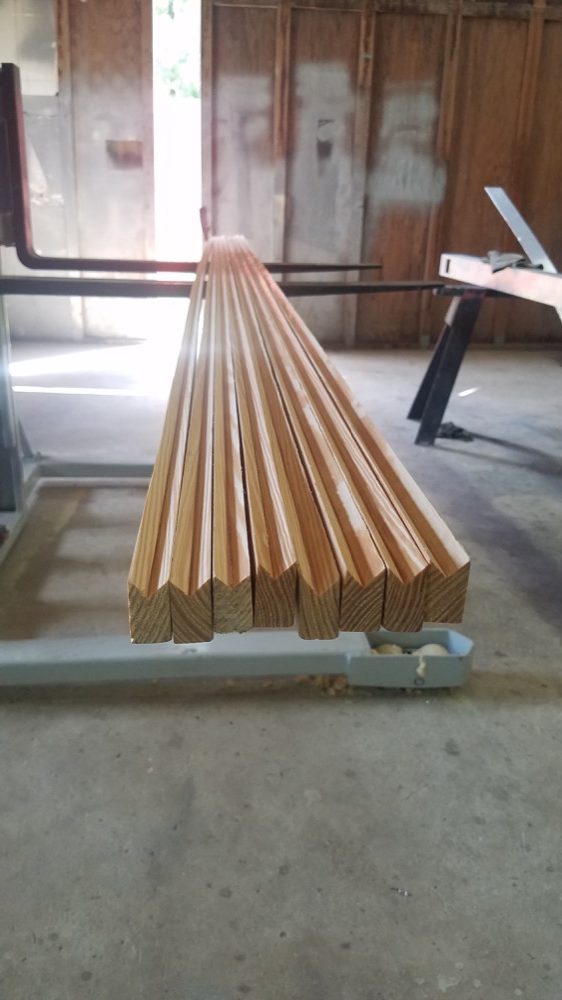 The mast is just big enough to bother making it hollow via the birdsmouth method. From my calculations I’ll only save about 4 pounds in weight, but it is a cool method to practice. Each of the eight staves is notched so they fit together with a large gluing surface. For added fun, the staves also taper so the mast diameter gets smaller at the top. 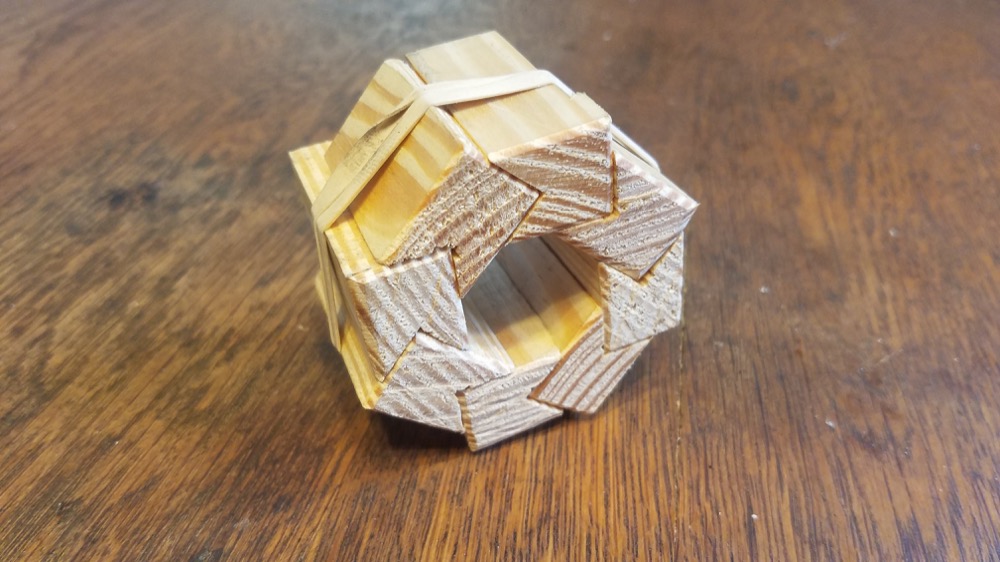 Here’s how they all fit together. Later the corners will get nocked off and the whole thing rounded up. 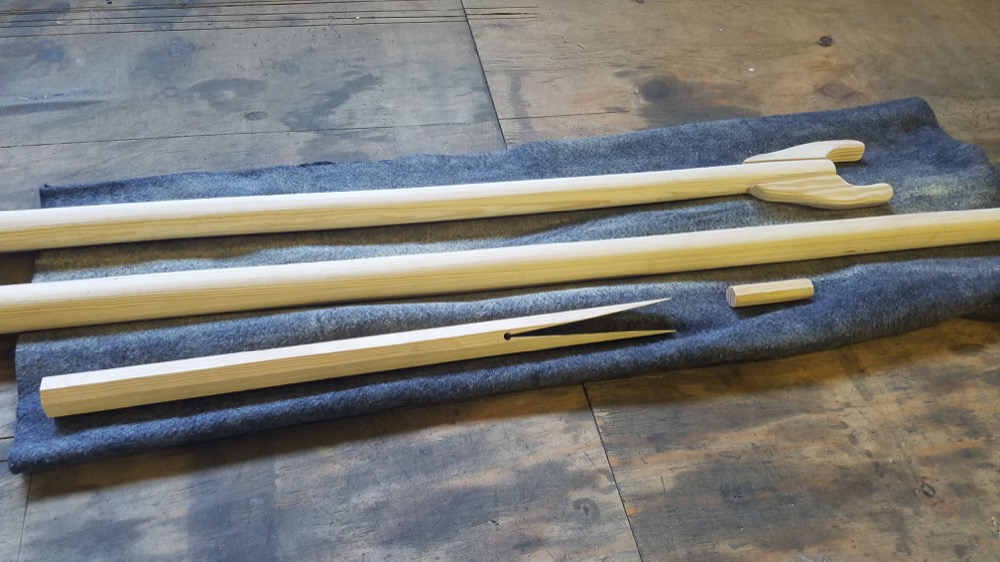 I made a plug for the top and bottom of the mast. The bottom plug is long enough to get above the mast partner and tapered to reduce any sudden change in stiffness. I also added a hole at the bottom of the notch to hopefully prevent any cracks from propagating. Probably not really necessary, but it can’t hurt. I’ve also made the boom and boom jaws.

To hold the staves for gluing, I plamsa cut out a pair of brackets. They are 1/8″ bigger than the staves so there’s a little wiggle room for everything.

Testing the staves and plugs in the brackets to make sure they fit. Better to find out now than halfway through epoxying.

I placed the brackets at the Bessel points of a beam (22% from the ends) to minimize any bending. This isn’t strictly true because the mast tapers and thus the stiffness changes, but with how little the mast weighs it really didn’t matter. 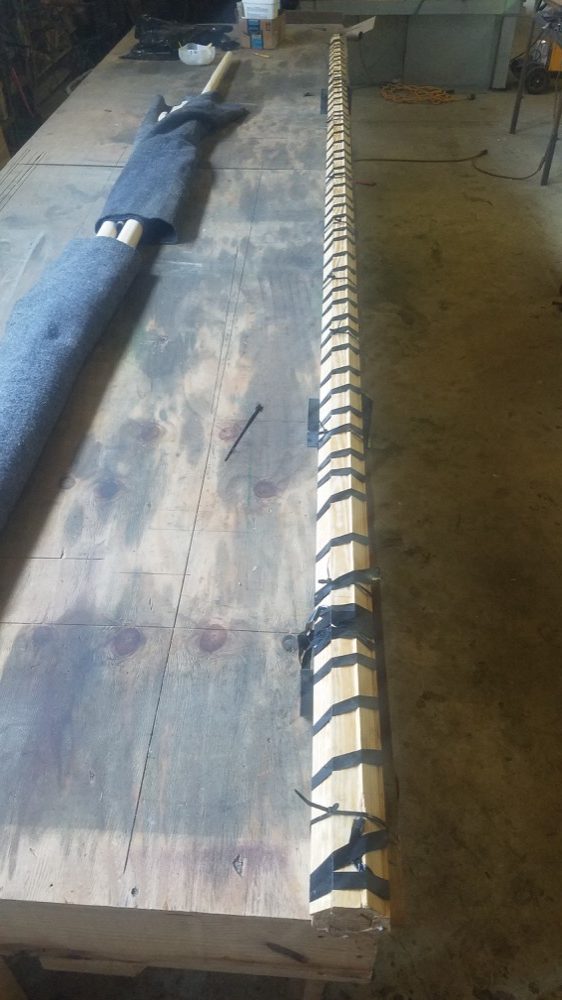 I didn’t take any pictures of the epoxying since it was a giant mess. But basically I brushed on thickened epoxy into the notches in the staves, and then stuck everything in the brackets. I zip tied every two feet or so and then wrapped electrical tape around. This could have gone better, but I think the mast will be ok. 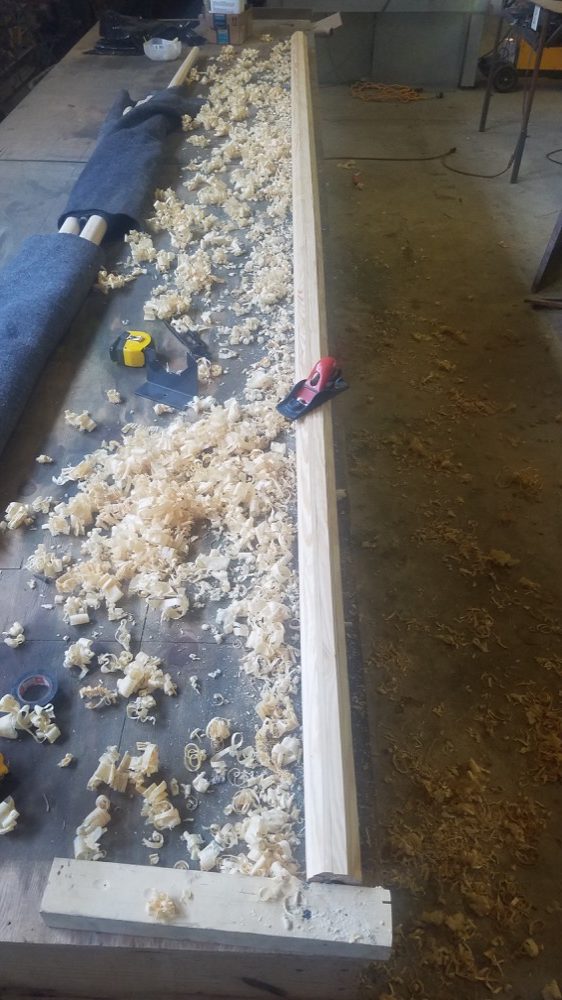 Planing the mast to round. I followed up with about 8 coats of varnish on all the spars. 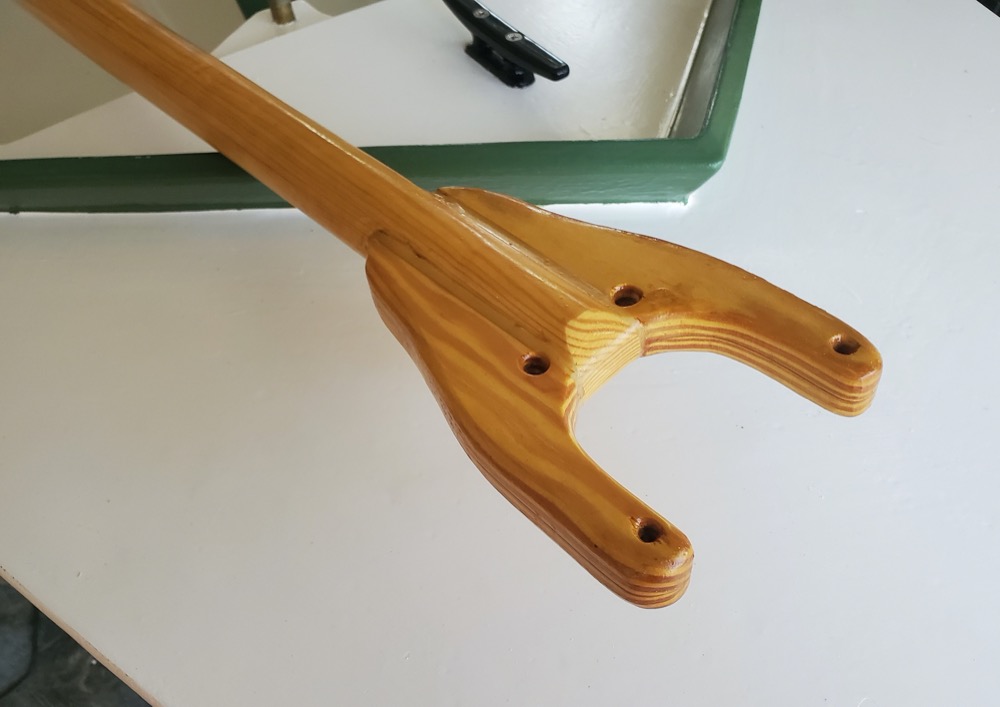 Originally I left the boom cylindrical at the end and glued a strip of leather around the inside of the jaws. This works ok until the boom angles upwards or downwards and then the cylindrical section digs into the mast and chips the varnish off. So I removed the leather and chiseled back the boom to provide some clearance.

Then I cut out a new piece of leather with some tabs that cover the beveled parts, both top and bottom. I used warm water to shape the leather and then glued it in place with contact cement. Most people tack their leather on with copper tacks, but I’m trying to avoid as many holes in the wood as I can. The contact cement on the previous strip of leather was working really well, we’ll see how this one holds up. 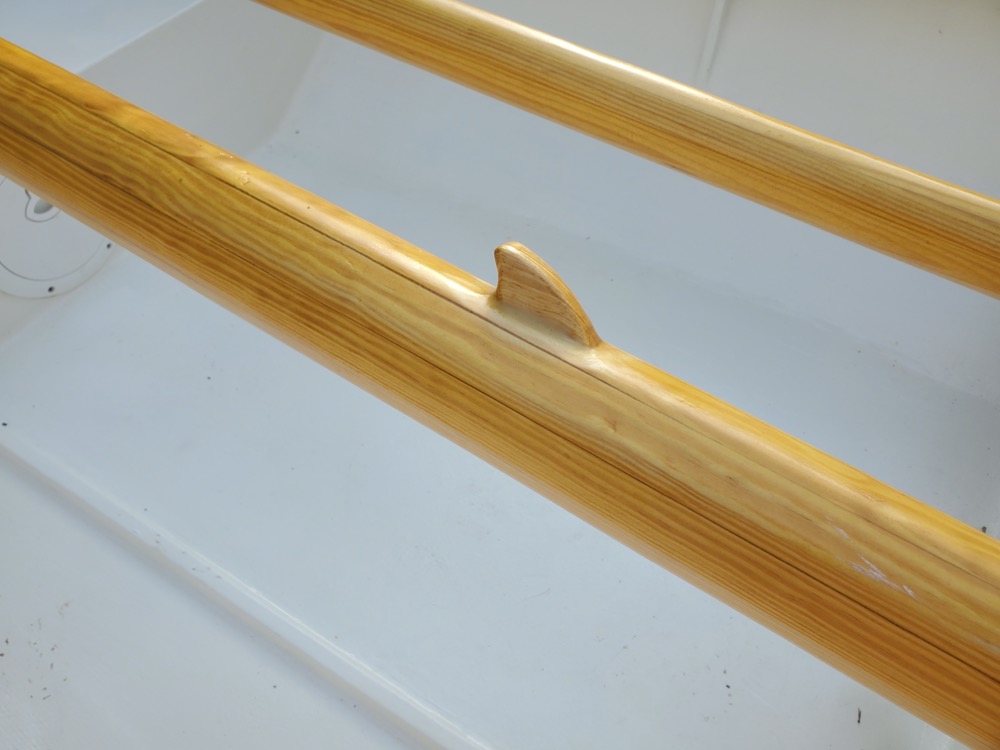 A huge source of frustration has been performance robbing creases in the sail due to the snotter sliding down the mast. This causes the sprit to slide down and takes tension out of the head of the sail resulting in big diagonal creases from the throat to the clew. I finally got around to cutting out a little hook and epoxying it onto the mast at the right height for the snotter. It’s a little taller than it needs to be, I think the next time I need to do a lot of varnishing I’ll trim 3/8″ off.