In June of 2019 my wife, parents, and I took a vacation to Ocracoke Island on the Outer Banks of North Carolina. It’s a skinny island that is about 15 miles long with a small village at the southern end. The sound side is mostly tidal marsh grass along the Pamlico Sound, while the Atlantic side is one long sandy beach. Ocracoke sits between Hatteras Island to the northeast, and Portsmouth Island to the southwest. Portsmouth has been uninhabited since the 1970s, although it was a bustling lightering and fishing port from the mid 1700s to the early 1900s. There are still some old buildings there that are kept up by the park service that I wanted to check out.

Taking the ferry from Hatteras to Ocracoke. I stuck the spars through the forward bulkhead hatches with moving blankets wrapped around them to protect the varnish.

Here is the town and small harbor, Silver Lake. The public boat ramp is at the north end of the harbor on the sound side and the cottage we rented was in the cluster of docks along the southern side of the harbor. “The Ditch” is the narrow opening which is scarcely 50 yards wide. Nine times a day a car ferry from Swan Quarter or Cedar Island comes through and docks at the ferry docks which are at the northern side of the harbor. It is safe to say they have the right of way going through the channel.

The first launch! And it floats surprisingly!

After launching Moga at the public boat ramp, my wife and I rowed around the point, through The Ditch, and into Silver Lake. The cottage we rented was located at the very southern end, so the first trip was right around a mile long. The boat rowed well and I didn’t have much trouble. The homemade oarlocks could be improved, as well as adding a loop of line for a foot brace. But otherwise the boat was easily moved and tracked well.

The next day I decided to sail around the harbor to get some practice with the sprit rig. I finished the boat the day before we left, so I didn’t even have time to test it at home. I rigged the boat while tied up to our dock, then set off! The winds were pretty light and the harbor is well protected, but there was always enough wind to ripple the surface of the water. I probably spent 2-3 hours making laps around the harbor and taking my wife and mom out for sails.

The very first sail! The harbor was full of anchored sailboats, so I had to dodge them as I was figuring the boat out.

Coming by on the starboard tack. More tension on the snotter would help the diagonal crease in the mainsail, and I need to make a tiller extension to get my weight closer to amidships for better trim. Dragging an immersed transom creates a lot of drag.

After getting a bit of practice I took my wife out for a bit. It was easier having her manage the jib sheets instead of having four things to keep track of. We got some great compliments from people motoring out in a dinghy and some other cruisers sipping wine on their sailboat.

One of the first things that stuck out to me was how powerful the rig was and how easily the boat moved. I didn’t know it until later, but sprit rigs generate more power than a Bermuda sail of equivalent area, and can be up to 30% more efficient to windward. You can really spread a lot of canvas on a simple unstayed mast, but the downside is that it’s hard to reef. I unrigged everything each day, but I later learned it’s easier to leave the sail hoisted and just brail it up. I’ll definitely be adding the brailing line and tackle to the sail later.

A big reason for bringing my sailboat to Ocracoke was because I wanted to explore the abandoned village at Portsmouth Island. It’s approximately 5.25 miles across the Ocracoke Inlet to a dock which leads to the old village. The inlet is strewn with sandbars that may be covered by only a few inches of water, and I’d imagine some pretty fierce waves can come in from the Atlantic. However, we picked a really nice day to go.

Our path from Ocracoke to Portsmouth while dodging the sandbars.

On our way to Portsmouth Island! I spent about 20 minutes wondering why the main sheet was so heavy before I realized I’d rigged the ratchet block backwards. After reversing the block it was much easier to trim the sail.

Docked at Portsmouth Island, looking towards the old village. This was a nice dock made from concrete, although a long bolt put a nasty gouge in the transom. I filled it with thickened epoxy and sanded it smooth when I got home.

Walking down the main road from the dock to the village. There were a few mosquitoes, but it wasn’t too bad.

It started to drizzle just as we got to the village, so we hid under the porch at the Theodore & Anne Salter house until it slacked off.

The post office and general store. The mosquitoes and green heads were starting to be a little more of a nuisance, but not too bad.

We walked across a small bridge to the Methodist Church where we were promptly swarmed by every flying pest on the island. It was unreal how bad they were, despite the fact we’d used a lot of bug spray. We literally must have had 30 flies buzzing around our heads in a constant cloud, and the only way to keep them off was to swing our hats madly and sprint back to the boat. All I can say is that something must have changed since people lived here, because there is no way I could. Maybe back in the day there were enough people to go around for the flies, but let me tell you, today they are vicious.

Heading across the inlet back to Ocracoke Island after surviving the insect apocalypse. My wife is admiring all my hard work to build the boat… 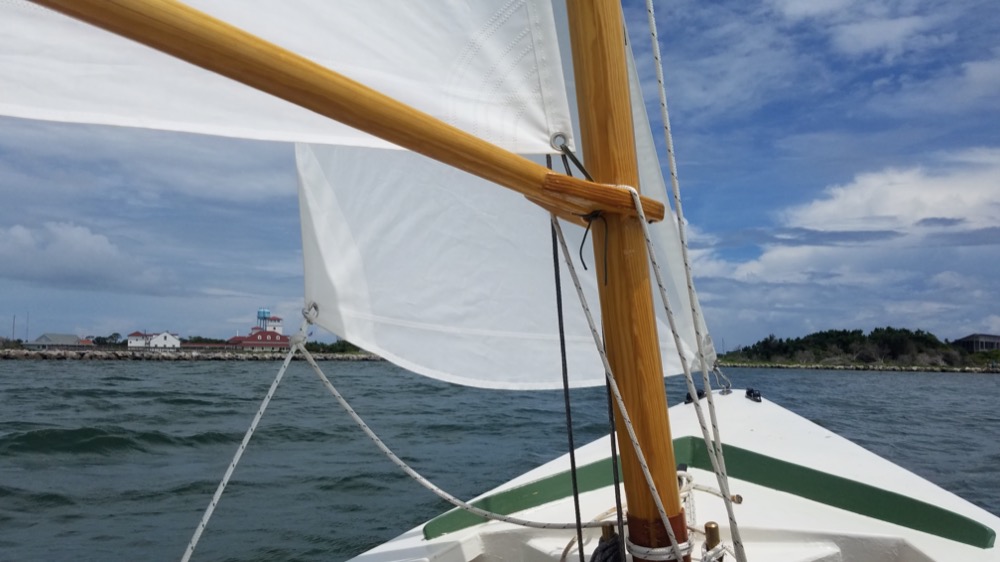 Approaching the entrance to Silver Lake.

Coming through The Ditch into the harbor after a long day. We sailed eleven miles and the boat did a wonderful job. I’m really pleased that I chose this design… it took a lot of work to build, but it is really rewarding in how well it sails.

Unfortunately Friday came around and our vacation would be over the next day. It had been a bit cloudy and rainy at times, but today offered a perfect opportunity for a sunset cruise. My wife and I took the boat out from the cottage’s dock and around to the public boat ramp to haul it out. While we were out, we sailed around waiting for the sun to set so my mom could take some pictures of us.

Tacking through the crowded anchorage in just a hint of a breeze.

Tacking through The Ditch was tough. It’s only 50 yards wide and the wind was nearly gone. I just about pulled out the oars, but a puff of wind got us through and into the sound.

Once we made it out of the wind shadow of the harbor we had better sailing. Those are the Cedar Island and Swan Quarter ferries behind me.

After heading out into the sound a bit we got an impromptu opportunity to do a man overboard drill. A gust of wind blew my hat off so we did a figure-8 to get back to it which avoids gybing.

Sailing around waiting for the sun to set.

The Ocracoke Lighthouse peeking just above the tree line.

Getting closer to sunset!

Here’s a picture my mom took of us over by the boat ramp. There was quite a crowd gathered watching the sunset and we got a number of compliments when we landed. We later searched through social media and found three pictures and one video of us!