Today I decided to take my sailboat out to the New Point Comfort lighthouse. This lighthouse was built in 1804 and used to be on a huge 100 acre island almost connected to the mainland, but it has gradually eroded away into just a tiny speck surrounded by riprap. I didn’t climb it today, but a few years ago I did after taking my canoe out to it. It was in pretty rough shape then and I’m sure it’s no better now.

The wind was forecast to be around 10mph, but either I don’t really know what 10mph wind looks like, or it was quite a bit higher. The wind was northwesterly and it was supposed to lighten up and swing around to westerly by early afternoon, but that didn’t seem to happen either. So my trip out to the lighthouse was mostly a run, while coming back I had to beat the whole way against the wind, waves, and tide. I went 23.2 miles in exactly 5 hours, averaging 4.6 mph and I hit a max of 8.1 mph. I’ve increased the frequency of the GPS points in my tracking app, so I guess that really is about the top speed of the boat. I might be able to improve it slightly once I build a tiller extension and get the trim a little better.

My GPS track of the trip.

I launched from the public boat ramp at the mouth of the aptly named Put In Creek. This creek flows into the East River which flows into the Mobjack Bay. It’s a nice ramp, although the parking is a bit limited and there’s no trash cans or restrooms. 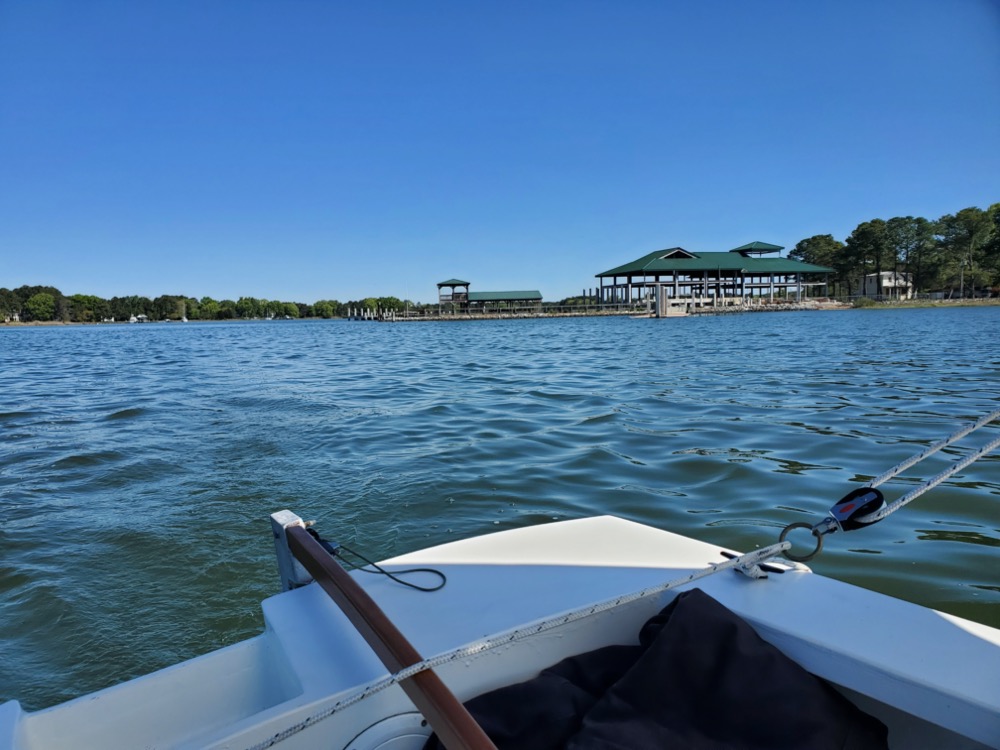 Heading down the East River past Williams Wharf. This area has a rich history from the colonial period through the steamboat era. In the 1600’s and 1700’s English goods were unloaded and tobacco was loaded to export. In the 1800’s it was an official port of entry. In the steamboat era it was a regular stop and the James Adams Floating Theatre played shows here. In the mid 1900’s it was an oil depot. In the early 2000’s the Mathews Land Conservancy bought it and they are in the process of building a huge pubic access site. There will be a boat ramp, docks, fishing pier, nature trails, and a community center building. 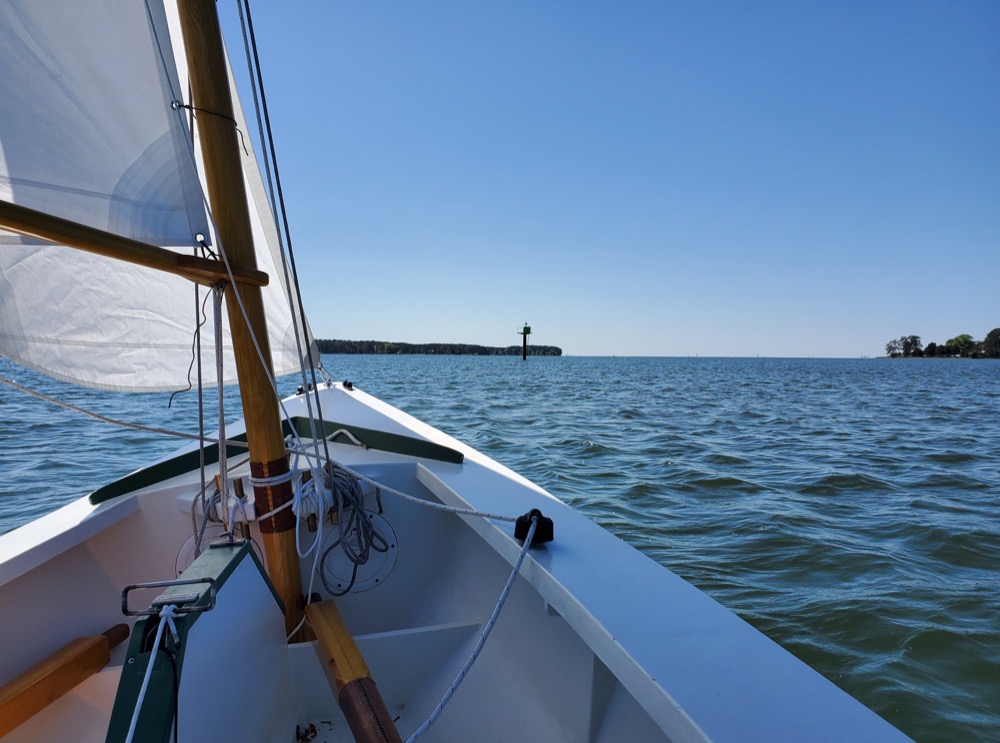 Coming up on the mouth of the the East River and the Mobjack Bay. I saw four or five crabbers out checking their pots. 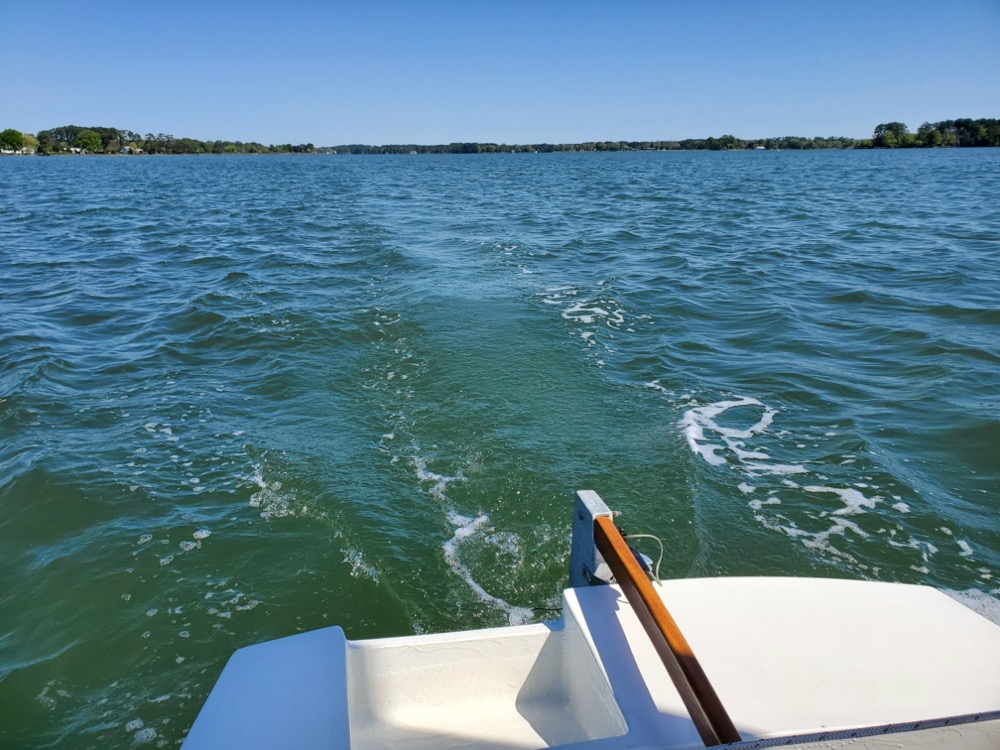 Looking back up the East River. Gotta remember what those houses look like so I can find the right place to turn when I come back!

Out into the Mobjack Bay! I kind of cut the corner at the mouth of the East River and it was pretty shallow. The centerboard never hit, but I could see ripples in the sand below. Fortunately the tide was rising and I wouldn’t have to worry about shallow water coming back… right? Actually I misread the tide table and the tide was dropping. We’ll see how that went when I come back. It’s probably too small to see, but New Point Comfort Light is just to the right of the point. 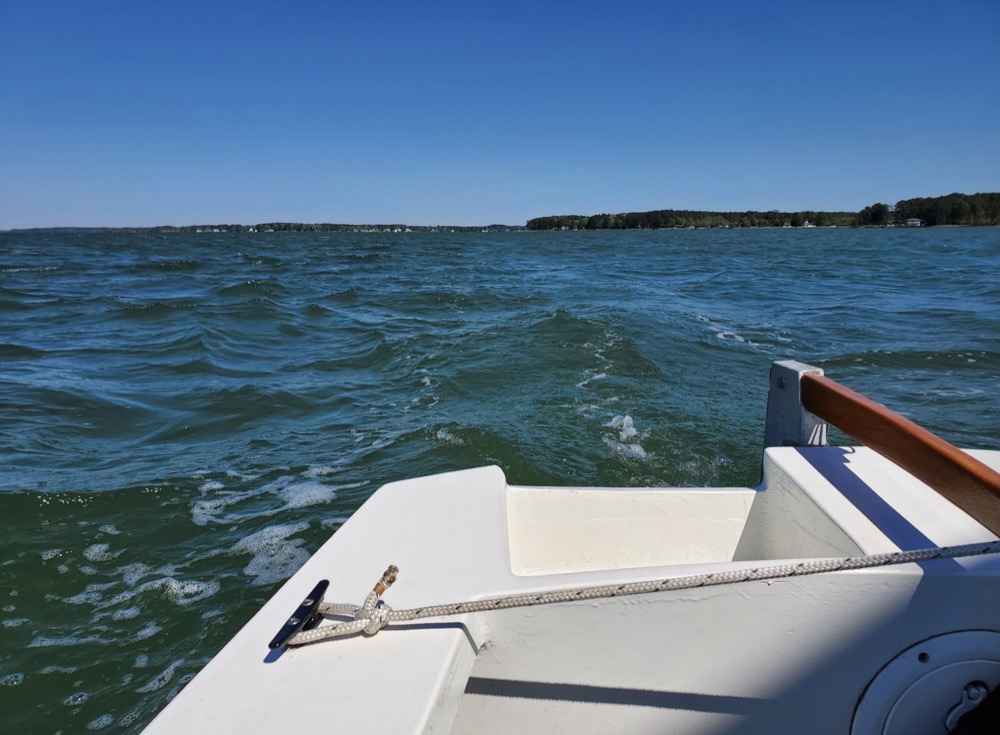 After making the turn into the Mobjack, I quickly shot down the shoreline. It was around in here where I started questioning Windy’s 10mph forecast. And to some extent my ability to get back. Since the wind was coming from the northwest, there’s about 10 miles of fetch. The waves were pretty steep and close together, but going downwind was smooth enough. A couple times I got the boat to surf down a wave for a few seconds which was exciting. Before I left I bedded the centerboard cap with some butyl rubber and I’m pleased to report that has stopped the leaking. 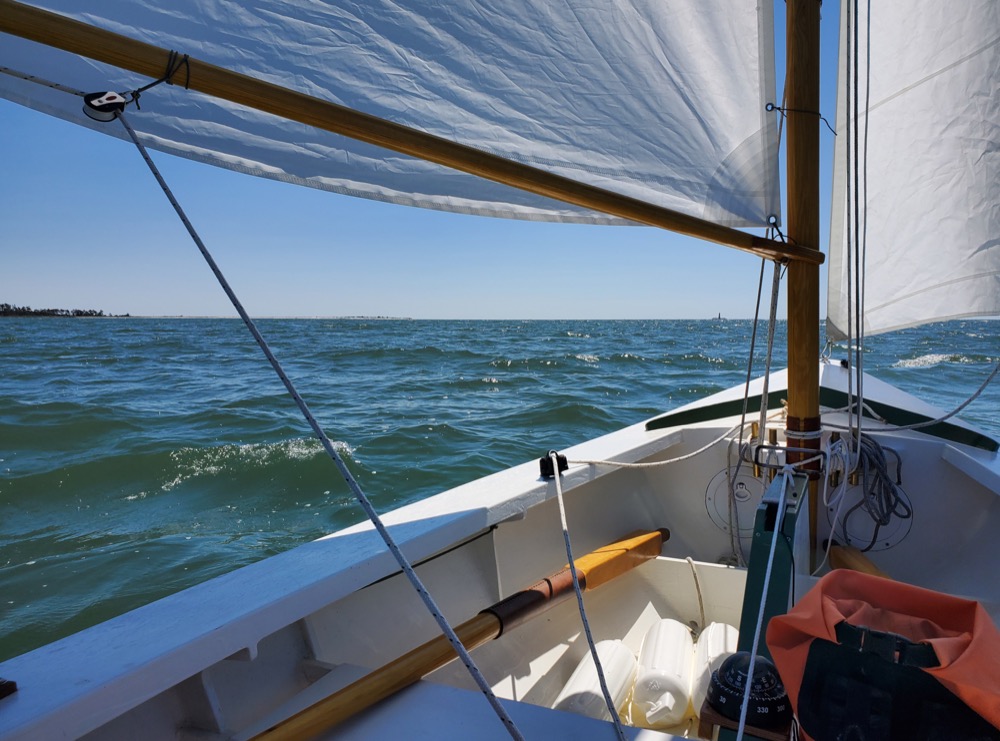 Getting closer! This is the last stand of trees on the peninsula before it turns into a long low marshy/sandy stretch. Just to the left of the woods out of frame is a wooden bird watching pier where I launched my canoe a few years ago to row out to the lighthouse. 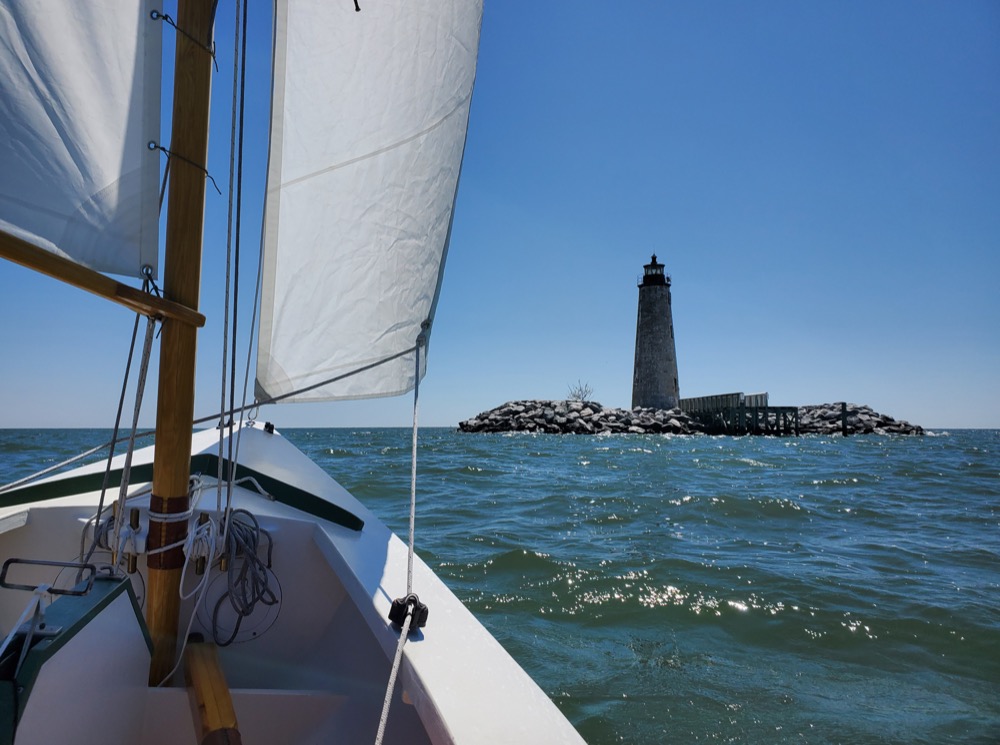 I made it! I considered stopping, but there was 10 miles of fetch and I didn’t want to risk getting blown onto the riprap which was making a kind of scary crashing sound. Plus there are breaking waves off to the left where it gets shallow. I figured by the time I could get the sail brailed up and turned around into the wind to row, I’d be half a mile out into the Chesapeake. I’m glad I climbed it a few years ago so I wasn’t as tempted. 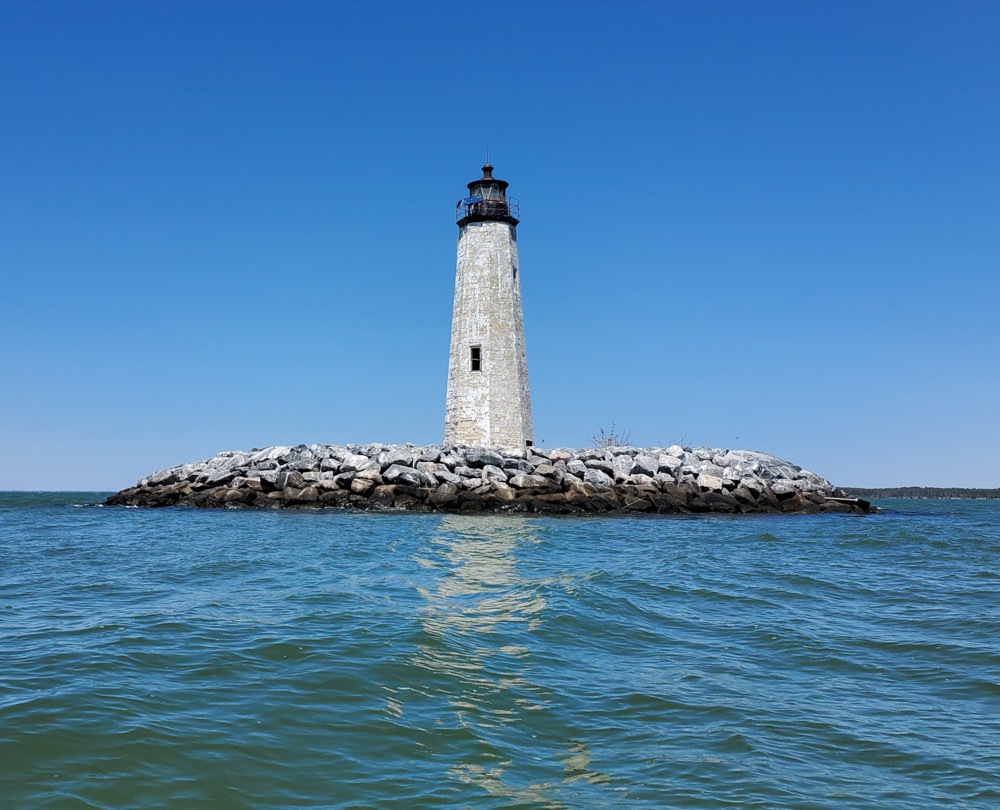 But I decided to circle it and call it a day. You can just make out the door on the bottom right. The riprap didn’t use to be nearly this high, but in 2012 Mathews County put these big boulders in place. There was a real worry the whole thing could wash away in a good hurricane. It’s still really exposed, but it’s probably better protected than it’s been since it was built.

Here are a few historical pictures and some I took when I climbed it in 2017: 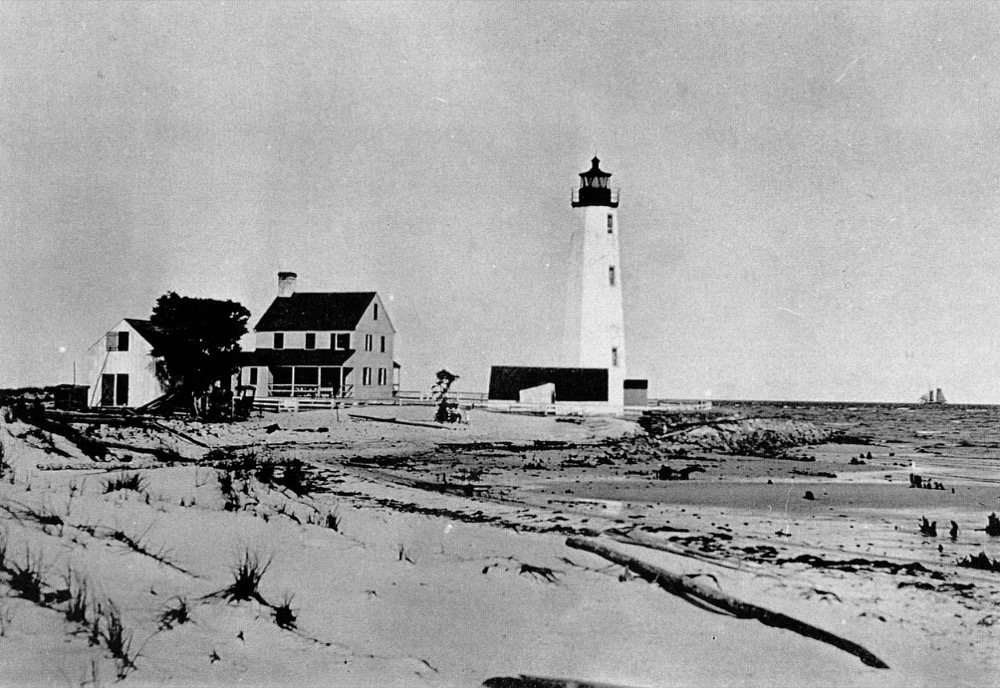 In 1910 the keepers house and outbuildings were still standing. The water is starting to cut around the edge though. 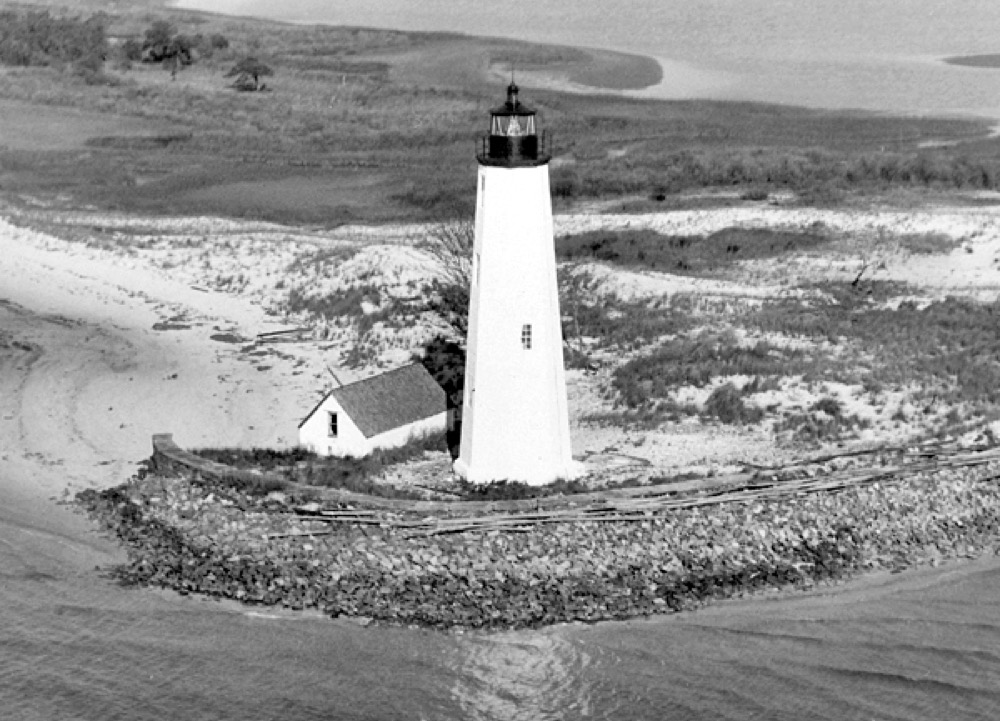 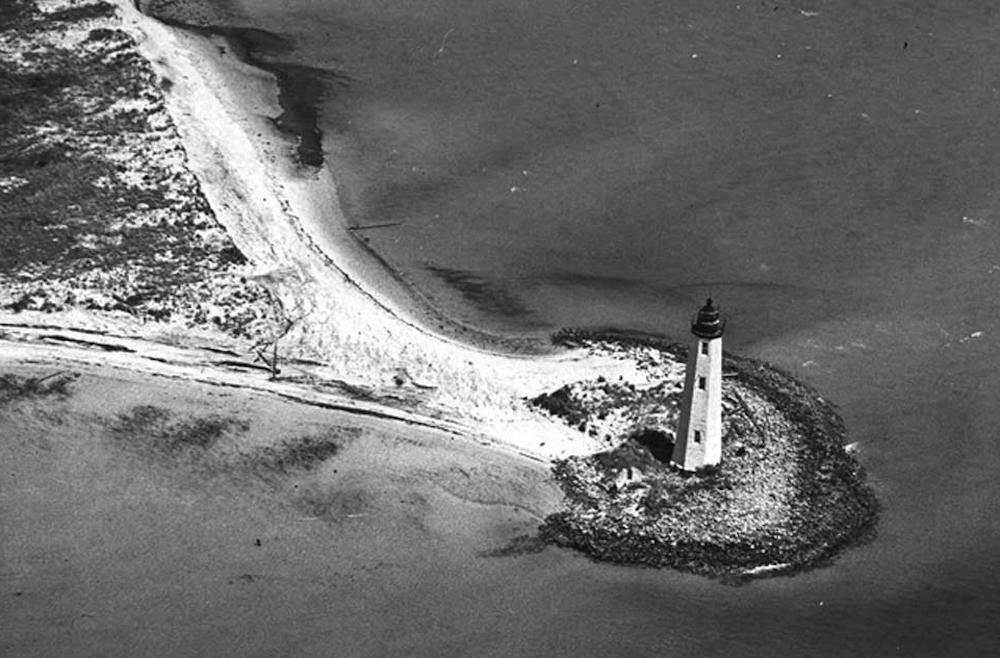 Nearly cut through by the 1950’s. You can just make out one wall of the oil shed which is still standing. 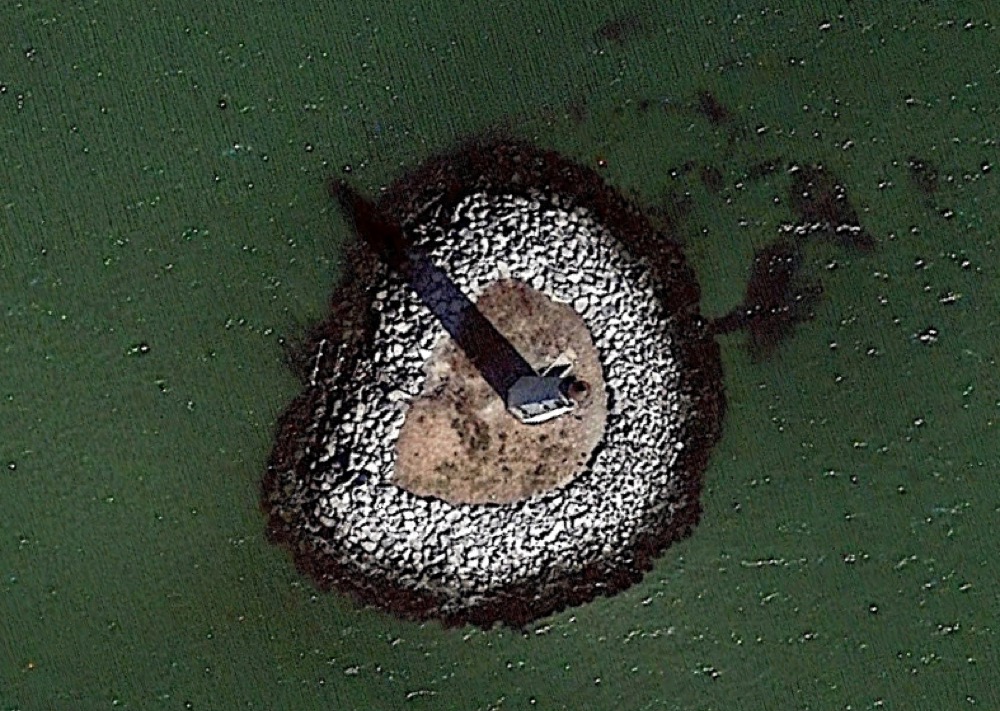 And here’s all that’s left today. The island is about 150′ x 150′ from an original 100 acres. This doesn’t show the longer dock that was built in 2016 to help restoration work sometime in the future. 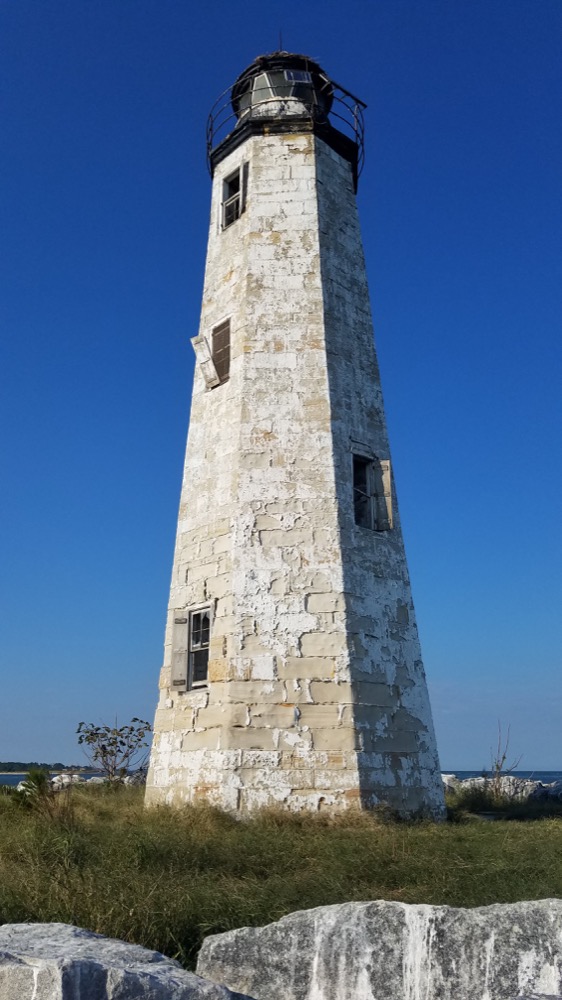 The tower is made from sandstone blocks and stands 58′ tall. It’s in pretty rough shape. It’s interesting how 200+ years of sand blowing around has weathered the lower blocks way more than the top. When my wife and I landed we must have scared off 50 pelicans… everything was covered in bird poop and smelled like rotting fish. 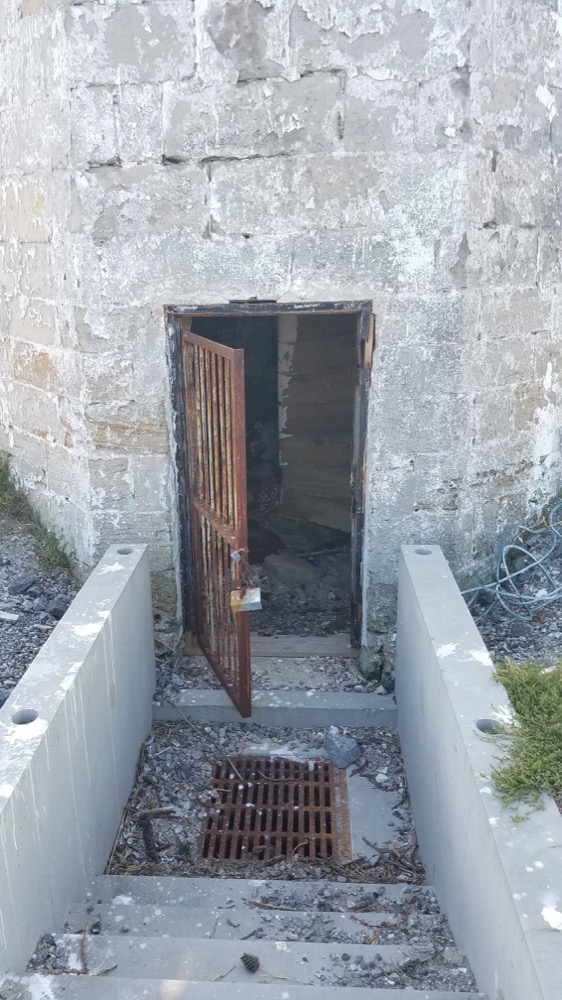 I didn’t expect it to be open when I arrived, but somebody has ripped the lock out of the frame. There were no posted signs, so I started for the top! You can see how much the island has been built up to keep it from flooding. 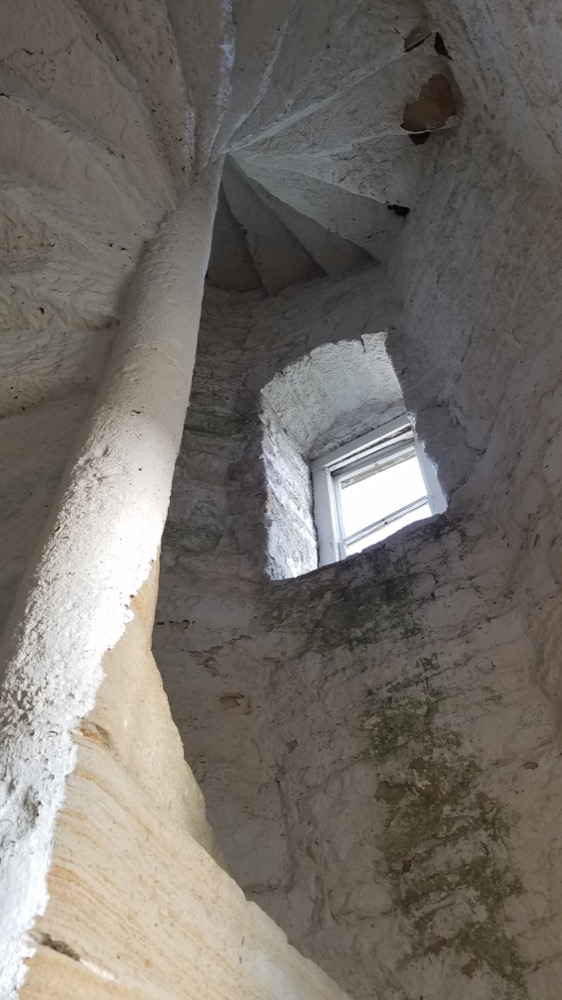 Sandstone steps. There’s no handrail and you really need to be close to the wall to have enough space for your foot. 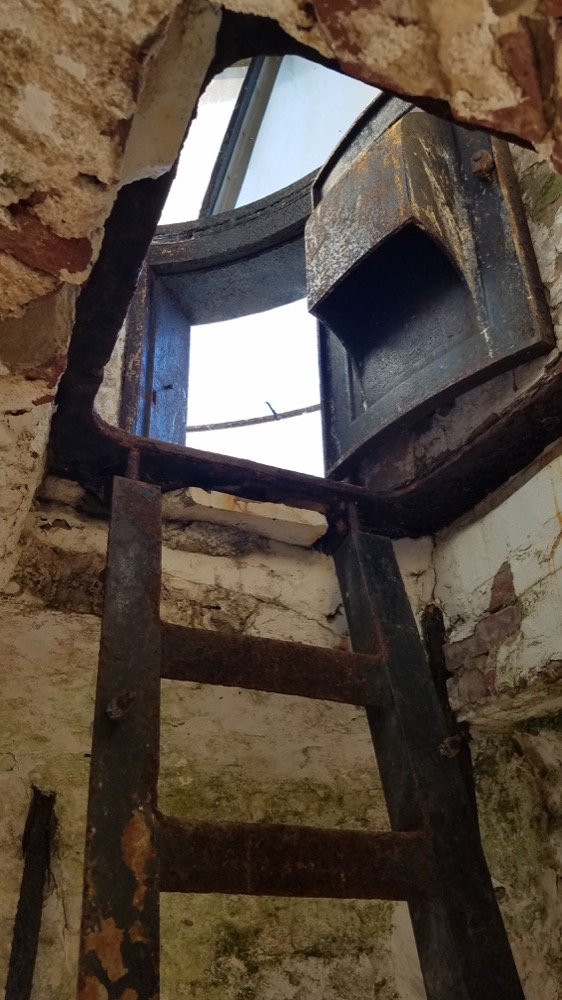 After 50 steps you make it to a wooden landing that looks to be pretty new. There’s a rusty ladder made from angle iron that leads up into the lantern room. One of the rungs has rusted through, so it’s a little sketchy. 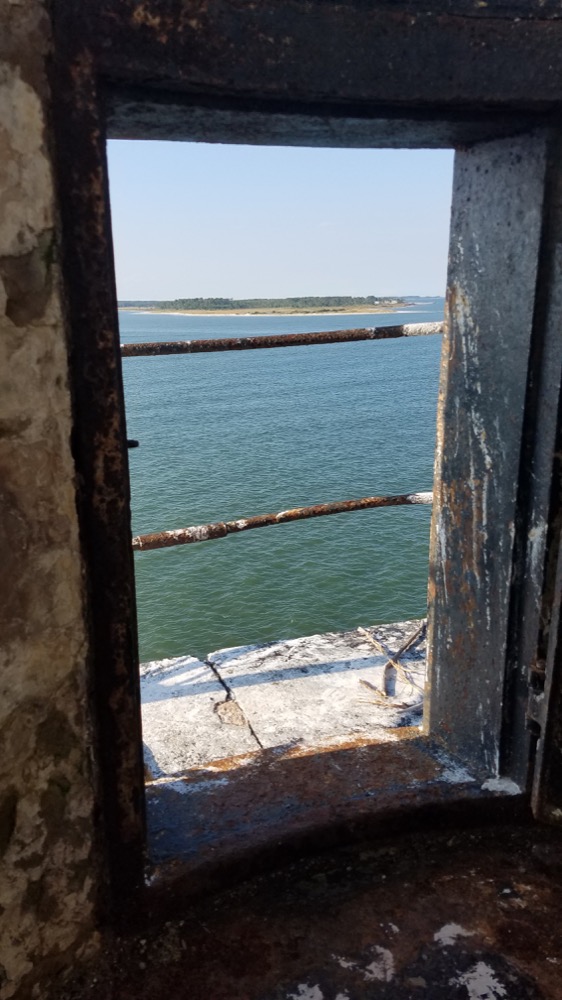 There’s a tiny door to the balcony which is about 3′ tall and 2′ wide. Everything is rusty and covered in bird poop. I walked out onto the balcony and the railing wiggled enough that a good shove might rip it right off. 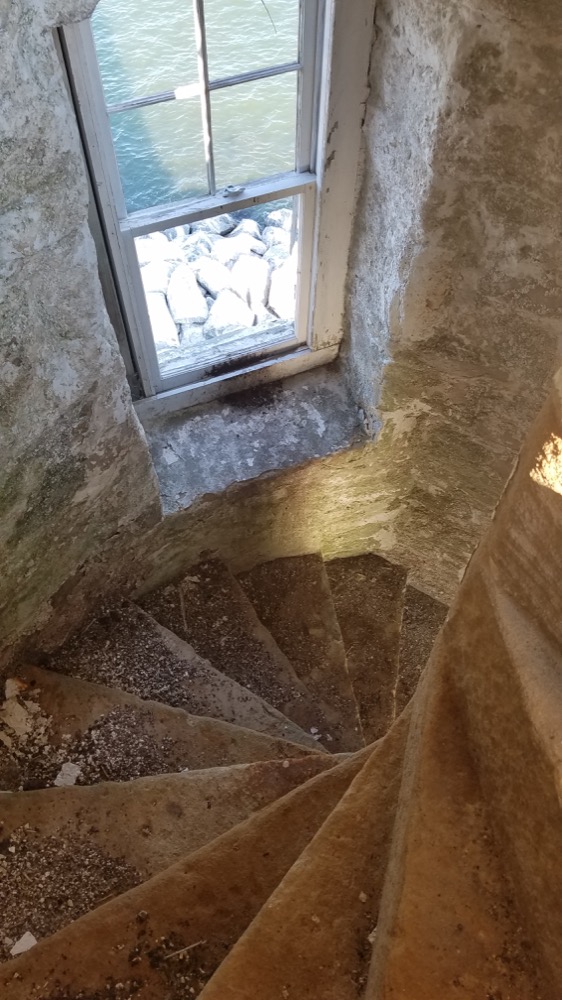 The steps are covered in loose stones and twigs that birds have brought in. 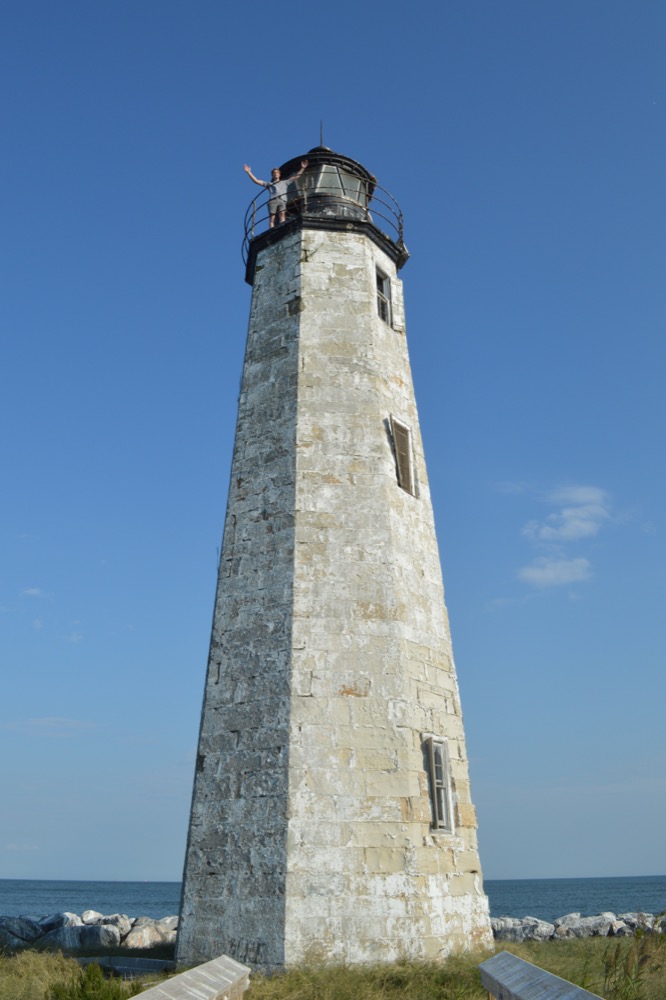 My wife took this picture of me at the top. Proof that I was there haha.

And back to today’s trip… 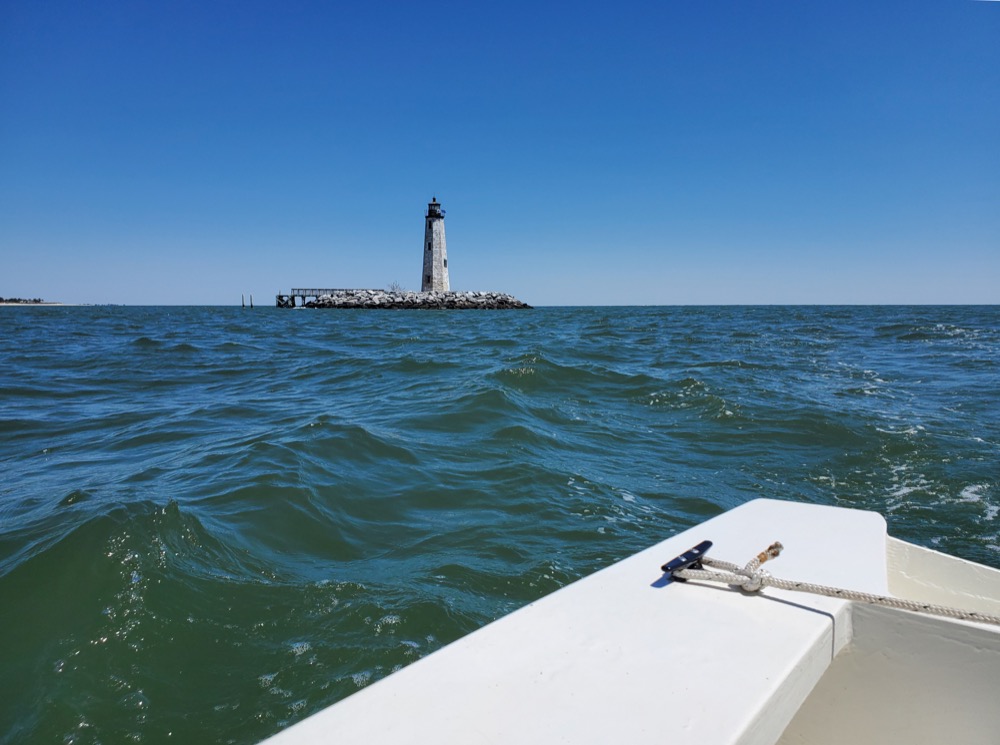 After rounding the island I started tacking back home. I pretty quickly found I had to sit on the rail to have any hope of keeping the boat upright. I’m not sure what the windspeed was, probably 20-25mph according to the Beaufort scale. I really need to figure out reefing… but it’s tough with a sprit rig. I’m thinking maybe drop the jib, then scandalize the main might be easier than trying to lower the snotter and tie in reefs. I really should practice sailing with just the main to see how it works. 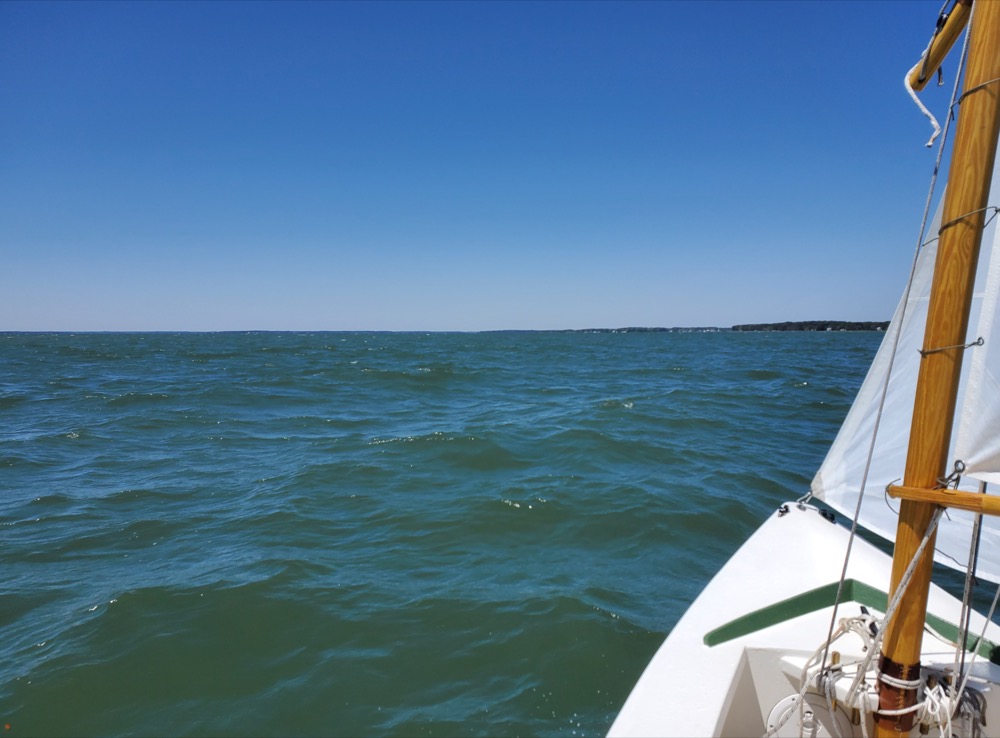 This is the only picture I took until I made it back into the East River. It doesn’t look too bad, but there were a lot of whitecaps and the waves were short and steep. They seemed to be spaced about 1.5 boat lengths apart which made for a rough motion. A couple times a wave hit the side of the boat and covered me in spray and at one point a whitecap nearly broke into the boat. Fortunately she just slid up overtop of it. Looking at my GPS track, I lost about 50 feet every time I tacked, and sometimes it took a few tries to get through the wind. But when I was moving the boat averaged around 4.5-5mph.

I tried to cut the corner since I thought the tide was rising and I made it through on the way out, but I soon started hearing my centerboard bumping along the bottom. I couldn’t point up any higher and I really didn’t want to tack back into the Mobjack if I could help it. The water was quite a bit calmer through here, so I pulled in on the main sheet and used my balance to keep the leeward rail underwater. For nearly half a mile I kept the boat heeled over which kept the centerboard from hitting. Those side decks come in handy again! 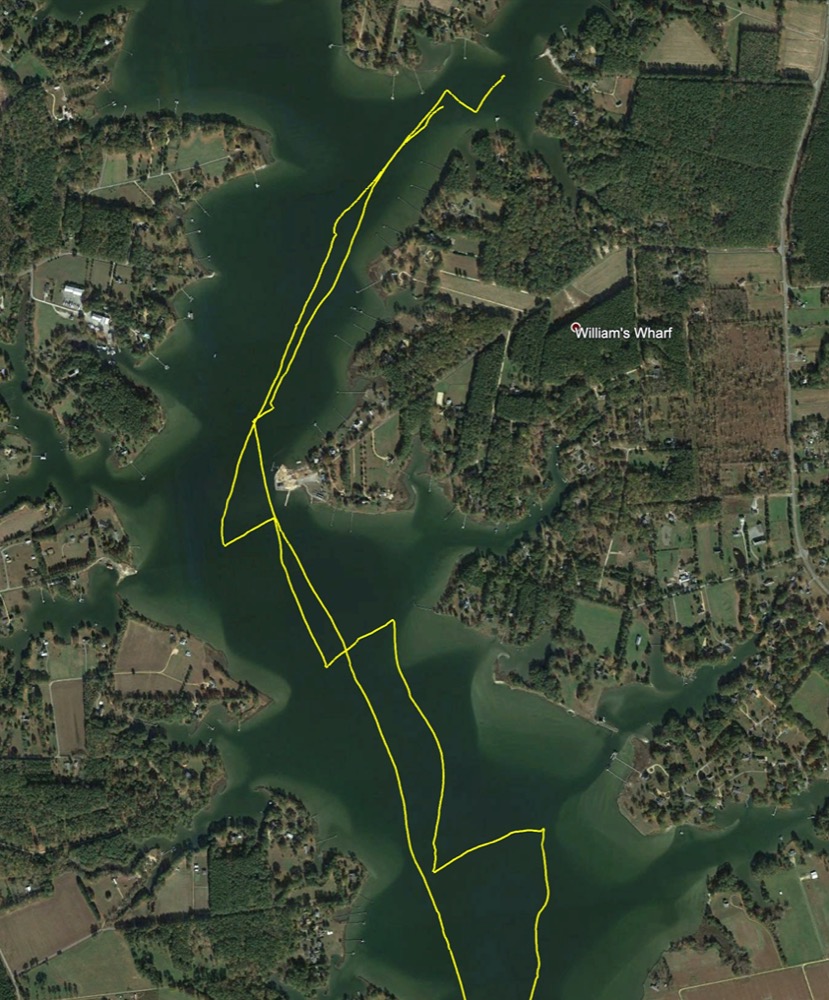 Even though the water was calm compared to out in the Mobjack, tacking up the river back to the ramp was the trickiest part of the day. I’d get hit by sudden gusts of wind that would nearly put the rail under, then the wind would die just as suddenly and I’d nearly fall off the windward side from hiking. But I eventually made it back to the ramp and got the boat hauled out. 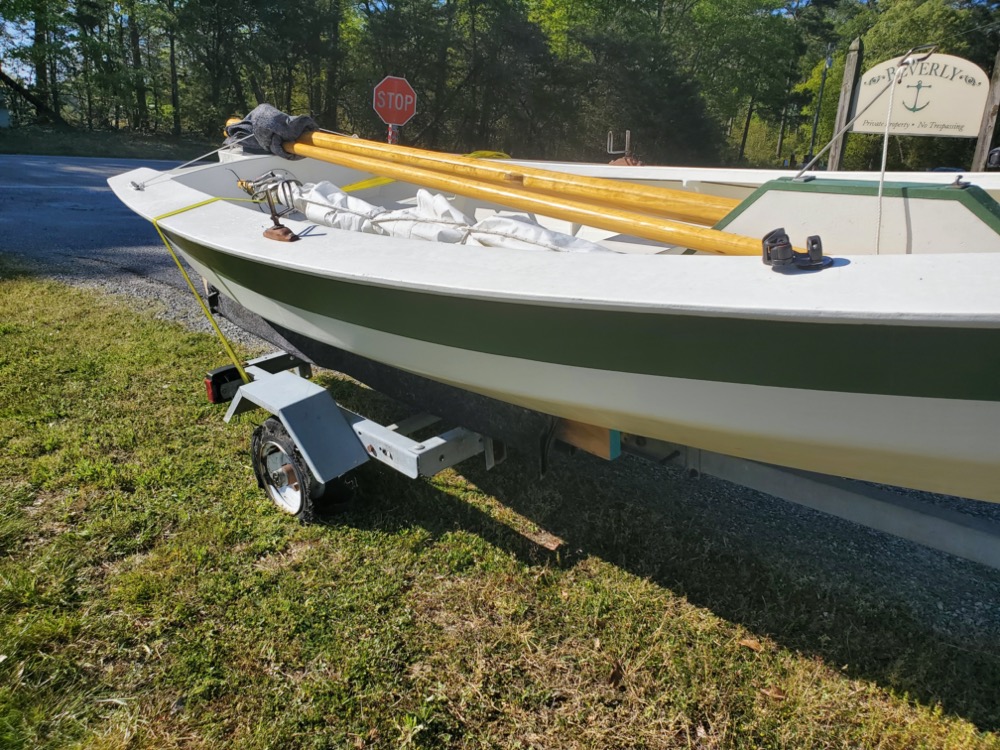 I guess the day went too well to get off without a minor disaster! Coming home I felt the trailer start to sway a bit and when I looked through the side mirror I saw a few chunks of rubber coming off. This tire was really old and starting to dry rot and I was thinking I should probably replace it. It took about 20 minutes to put the spare on and with that today’s adventure was over!